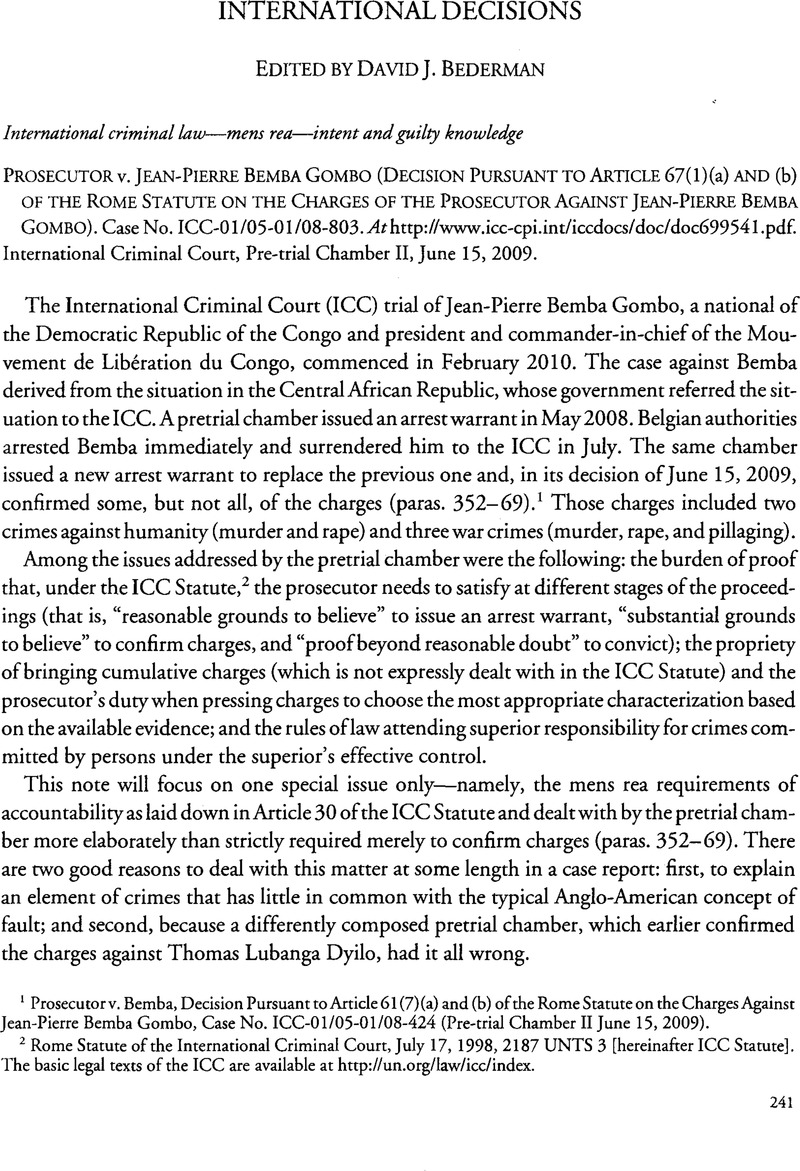 2 Rome Statute of the International Criminal Court, July 17, 1998, 2187 UNTS 3 [hereinafter ICC Statute]. The basic legal texts of the ICC are available at http://un.org/law/icc/index.

8 See Albin, Eser Mental Elements—Mistake of Fact and Mistake of Law , in 1 The Rome Statute of The International Criminal Court: A Commentary,Google Scholar supra note 4, at 889, 915 (noting that liability based on mere awareness of the risk that one’s conduct may result in the prohibited consequence—dolus eventualis—”seems not to be the position of the Rome Statute”); Pisani, supra note 3, at 129-30 (noting that “awareness that a circumstance exists or a consequence will occur in the ordinary course of events” includes oblique and direct intention (which is correct but only insofar as the author identifies “oblique intent” with dolus indirectus)). According to Donald, Piragoff Mental Element , in Commentary on The Rome Statute of The International Criminal Court 527, 533 (Otto, Triffterer ed., 1999)Google Scholar, the combination of “intent” and “knowledge” as contemplated in the ICC Statute denotes dolus directus. This writer respectfully disagrees: it is not the knowledge of, but the desire to bring about, the harmful consequences of one’s act that qualifies intent to become dolus directus.

9 Lubanga, para. 352; see Hector, Olasolo Complementarity Analysis of National Sentencing or State Action? Locating the Site of Supranational Criminality , in Sentencing and Sanctioning in Supranational Criminal Law 37, 49 (Roelof, Haveman & Olaoluwa, Olusanya eds., 2006)Google Scholar (stating that “it can be argued” that Article 30 includes dolus eventualis). But see id. at 51 (concluding that “intent and knowledge militates against recklessness,” which Olasolo previously equated, id. at 50, with dolus eventualis).

10 Prosecutor v. Stakić, Case No. IT-97-24-T, para. 587 (July 31, 2003); see Olzsolo, supra note 9, at 49 (defining dolus eventualis as comprising “(i) the awareness of the risk that the forbidden result may take place as a result of one’s action or omission; and (ii) the acceptance of such result by making peace and reconciling oneself with the idea that it will occur”).

15 Antonio, Cassese Crimes Against Humanity , in 1 The Rome Statute of The International Criminal Court: A Commentary, supra note 4, at 353, 364.Google Scholar

17 The appeals chamber of the Special Court for Sierra Leone has relied on the Zimmermann definition of “willfully” to hold—erroneously, I believe—that the mental element attending an act or threat of violence upon which the crime of terrorism is based “requires the Prosecution to prove that the accused acted consciously and with intent or recklessness in making the civilian population or individual civilian the object of an act or threat of violence” (emphasis added). Prosecutor v. Fofana, Case No. SCSL-04-14-A, para. 355 (May 28, 2008); see Galić, para. 54 (stating that “willfully” includes recklessness but not negligence).

27 Eser, supra note 8, at 900; see id. at 894 (noting that mentioning a particular form of mens rea in the definition of some crimes and not in others could be (mis) interpreted to mean that fault is not an element of the latter category of offenses, but that this interpretation was precluded by the insertion of a general provision on the mental element in the ICC Statute).

28 Report of the Preparatory Committee for the International Criminal Court, Finalized Draft Text of the Elements of Crimes, UN Doc. PCNICC/2000/l/Add.2 (Nov. 2, 2000).