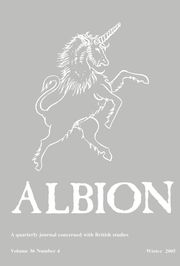 Cuthbert Tunstal and Heresy in Essex and London, 1528

Lollardy, the native English heresy vigorously suppressed since the early fifteenth-century, did not die with its suppression in the wake of the rebellion of Sir John Oldcastle in 1414. A century later Lollard beliefs remained current, albeit in varied forms. The most consistent features in this eclectic religious system were the possession and reading of English translations of the Scriptures, a sacramentarian view of the Eucharist, and an often vehement anticlericalism. With few exceptions Lollardy was the preserve of the unlearned; based on the religious fringes of towns and the greater cities, rather than in the learned centers of the universities or the Court.

1 See Hudson, Anne, The Premature Reformation: Wyclifflte Texts and Lollard History (Oxford, 1988), pp. 446–507.Google Scholar For a detailed account of Lollard belief in London, see Brigden, Susan, London and the Reformation (Oxford, 1989), pp. 86–106.Google Scholar The first years of the reign of Henry VIII had seen a substantial rise in Lollard trials, although whether this is evidence of a rise in Lollardy or merely of a more vigilant episcopate is debateable. Archbishop Warham and his commissaries engaged in a full-scale purge of Kent in 1511–12. The records of these trials are reproduced in Kent Heresy Proceedings, 1511–12, ed. Norman Tanner (Maidstone, 1997). Other magna abjúrala took place in Bishop Geoffrey Blyth’s Coventry and Lichfield, detailed in Lichfield Joint Records Office, MS B/A/1/14Í, fos. 98–100r (Reg. Blythe); LJRO, MS B/C/13 (Lichfield Court Book), and examined by Fines, John, “Heresy Trials in the Diocese of Coventry and Lichfield, 1511–12,” Journal of Ecclesiastical History 14 (1963): 160–74.Google Scholar The apparently large number of trials in Smith’s, Bishop William diocese of Lincoln are known only through their account in The Acts and Monuments of John Foxe, ed. Pratt, J., 6 vols. (London, 1877), 4:123, 214Google Scholar (trials that Foxe dates to 1507–08, but which Thomson, John, The Later Lollards, 1414–1520 [Oxford, 1965], p. 87Google Scholar, has shown ought more properly to be assigned to 1511.) Those of various dates between 1507 and 1519 in Edmund Audley’s Salisbury are abstracted in Wiltshire Records Office, MS Reg. Audley, fos. 147–63. For several isolated trials in Richard Fox’s Winchester see Hampshire Records Office, MS 21M65 Al/18, f. 87r (n.d. between 1506–11; HRO, 21M65 Al/19, fos. 68–76 (1512, not 1514, as Thomson suggests in Later Lollards, pp. 88–89.); HRO, 21M65 Al/20, fos. 18–19v (1521). For Richard Nix’s occasional anti-Lollard actions in Norwich, see Thomson, Later Lollards, pp. 135–36; Houlbrooke, Ralph, Church Courts and the People during the English Reformation, 1520–1570 (Oxford, 1979).Google Scholar For John Fisher’s trials in Rochester, see Rochester Reg. iv, fos 24, 41v, 47–47v, 62. For Richard Mayew’s trials in Hereford, see Register of Richard Mayew, Bishop of Hereford, ed. A. T. Bannister (Canterbury and York Society 27, 1921), pp. 109–10. Heresy proceedings in Richard Fitzjames’ London are briefly noticed in London Guildhall Library, MS 9531/9, fos. 4–5, however Trinity College Dublin, MS 775, fos. 122v-124v (Archbishop Usher’s transcripts of selections from a London heresy register no longer extant) demonstrate that they were much more extensive than the register entries suggest. An account of a later, substantial Lollard persecution by Longland, John, Bishop of Lincoln in 1521, is given in Acts and Monuments, 4: 219–46Google Scholar, although no manuscript verification survives. See Thomson, The Later Lollards.

8 Strype, Memorials, 1, pt. 2: 54–65. Unfortunately, Strype’s transcriptions of Foxe’s papers and other sources seem no longer to be extant, which obliges scholars to rely on the published version. See Hudson, The Premature Reformation, p. 474, n. 158.

15 Note that the abjuration is not itself in Grefton’s hand. His notarization post-dates Ffoster’s examination.

17 There is also the mystery of what happened to other folios detailing material from Essex in 1528 seen by Strype who copied them from the Foxe papers, which are not bound in MS Harleian 421.

18 It is a tantalizing possibility that the thirty folios preceding Ffoster’s case may have contained material from the Bilney and Arthur trials, or other work of the 1527 legatine commission. However, as Tunstal was not the ordinary for Bilney or Arthur it is unlikely.

19 The vicar general Geoffrey Wharton is here listed as the chief official of the Consistory of London. BL, MS Harleian 421, f. 9a, first paragraph.

20 Although in central Essex, Colchester was under the jurisdiction of the bishop of London.

23 One might compare these articles with the ambiguous abjuration of Thomas Higgins in Hereford in 1511, Register of Mayew, pp.109-10.

25 These sectarians and others in BL, MS Harleian 421 have been studied in detail by Andrew Hope, whose as yet unpublished research reveals them to have been largely of the merchant classes, with very few “lower sort” adherents save some servants of the wealthier accused. I am most grateful to Mr Hope for discussion about the fruits of his work on wills and other material in the Essex Records Office.

30 The book-owners of this group, and their books, are discussed in Hudson, The Premature Reformation, pp. 486–88.

31 Neither Darell nor Bousfel (perhaps Boswell?) appear in the standard reference works. Nele is in Emden, A. B., Biographical Register of the University of Cambridge to 1500 (Cambridge, 1963), p. 420.Google Scholar

32 BL, MS Harleian 421, f. 15a (Clxx). LP calls Harris “Herris”–a simple and understandable mis-reading of the rather scrappy hand of this document.

39 Fisher suggested that those who found themselves intrigued by the New Learning should “come vnto [him] secretely,” and that either he would persuade them back to rights, or they would make him a Lutheran. Fisher’s offer, and the enactment of the policy it foreshadowed, are discussed at length in this author’s “The suppression of Lutheran Heretics in England, 1526–1529,” Journal of Ecclesiastical History 54, 2 (April, 2003): 228–53.

41 The details of the Garrett case are spread over a variety of sources. See note 6 above, and this author’s “Suppression of Lutheran Heretics” for a synthesis.

43 John Royston, ThD, was prebendary of Pancratius under Tunstal, through to the reign of Edward 1529–1551. Le Neve Fasti, 5: 55. There is no record of his degrees at either Oxford or Cambridge. He may have had a Continental educational background.

53 Strype, Memorials, 1, pt. 2: 59–62; BL, MS Harleian 421, f. 27 (all this material at LP 4, no. 4254). Although conducted at Nix’s house rather than Tunstal’s palace, it was the bishop of London who was in the chair. Unfortunately none of the extant material notes any judges or officials other than Tunstal himself.

61 LP incorrectly dates the last examinations to 21 July. The manuscript is, however, quite clearly “xxii die mensis July.”

62 Hilles is not named in the manuscript, but that it is his case is apparent from the content of the evidence given, specifically the closeness with which it accords with the evidence of John Tyball (who mentions Hilles as his companion when visiting Barnes).

Cuthbert Tunstal and Heresy in Essex and London, 1528
×

Cuthbert Tunstal and Heresy in Essex and London, 1528
×

Cuthbert Tunstal and Heresy in Essex and London, 1528
×
×