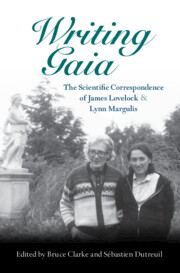 In 1972, James Lovelock and Lynn Margulis began collaborating on the Gaia hypothesis. They suggested that over geological time, life on Earth has had a major role in both producing and regulating its own environment. Gaia is now an ecological and environmental worldview underpinning vital scientific and cultural debates over environmental issues. Their ideas have transformed the Earth and life sciences, as well as contemporary conceptions of nature. Their correspondence describes these crucial developments from the inside, showing how their partnership proved decisive for the development of the Gaia hypothesis. Clarke and Dutreuil provide historical background and explain the concepts and references introduced throughout the Lovelock-Margulis correspondence, while highlighting the major landmarks of their collaboration within the sequence of almost 300 letters written between 1970 and 2007. This book will be of interest to researchers in ecology, history of science, environmental history and climate change, and cultural science studies.

‘Gaia – a hypothesis, a theory, a research program, a philosophy of nature. For the last half century, the astonishing work of James Lovelock and Lynn Margulis has cast and recast again a concept with implications for the atmosphere, Earth history, ecology, and exobiology. Both of them would have already stood as major figures in modern science; together, they gave us a concept that remains generative across fields.  In this vital, remarkable volume of their letters, one can see the origin and development of Gaia, in the complementarity of their interventions, in their mutual support, in their occasional substantive disagreement. Bruce Clarke and Sébastien Dutreuil bring us a volume that will be read for decades across the very wide range of the environmental sciences.’

‘Indeed, Lovelock and Margulis found that they ‘had something to say’ together, a question they ask in 1971 in a letter! What they had to say changed my life and the lives of many people. Gaia is a polymorphous concept, hypothesis, planet, boundary object in conflict, and collaboration among scientists of different disciplines and persuasions, Earth systems’ conceptual foundation, popular passion, and much more. Gaia matters, and Lovelock and Margulis gave us this generative formulation of the living Earth as a complex dynamic, self-organizing system. This collection – with its sober, extensive, enticing scholarly apparatus – makes the hairs of my arms stand up with pleasure and excitement. Here the reader will find unadorned letters between two very different kinds of professional scientist over many years of a complex personal and intellectual relationship. I am deeply grateful to the scholarship and passion of Bruce Clarke and Sébastien Dutreuil for this book.’

Donna Haraway - University of California at Santa Cruz, author of Staying with the Trouble: Making Kin in the Chthulucene

‘Writing Gaia offers a fascinating window on the meeting of two great minds. This insightful set of correspondence and commentaries provides an unprecedented resource on the history of the Gaia concept.’

‘Writing Gaia is a revealing and surprisingly entertaining record of the long intellectual and personal relationship between two idiosyncratic scientific geniuses and rebels from whose cerebral symbiosis and complex friendship was born the Gaia hypothesis, which profoundly changed how we think about Earth and life. The collected letters of Lovelock and Margulis, along with accompanying essays by some of their key collaborators, have been skillfully assembled with insightful commentary by Clarke and Dutreuil.  The result is a riveting intellectual journey, spiced with gossip, intellectual feuds, and occasional moments of touching intimacy. This book will be required reading for students of Earth’s biosphere and of modern history of science.’

David Grinspoon - Astrobiologist and author of Earth in Human Hands

‘It is not hyperbole to say that microbiologist and cell biologist Lynn Margulis and atmospheric chemist James Lovelock were two giants of twentieth-century science. Margulis's serial endosymbiosis theory resolved the riddle of the origin of the eukaryotic cell, forever changing biology. Lovelock developed the Gaia hypothesis, a radically synthetic vision of life on Earth, in which Margulis became his chief collaborator. Published here for the first time, their correspondence provides a fascinating window into the lively interaction of two extraordinary minds and personalities, while also showing the evolution of the Gaia idea and its cultural and scientific reception. This is captivating reading, and I could not put it down!’