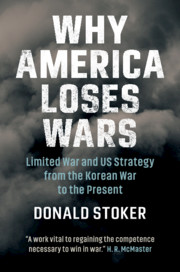 How can you achieve victory in war if you don't have a clear idea of your political objectives and a vision of what victory means? In this provocative challenge to US policy and strategy, Donald Stoker argues that America endures endless wars because its leaders no longer know how to think about war, particularly limited wars. He reveals how ideas on limited war and war in general evolved against the backdrop of American conflicts in Korea, Vietnam, and Iraq. These ideas, he shows, were flawed and have undermined America's ability to understand, wage, and win its wars, and to secure peace afterwards. America's leaders have too often taken the nation to war without understanding what they want or valuing victory, leading to the 'forever wars' of today. Why America Loses Wars dismantles seventy years of misguided thinking and lays the foundations for a new approach to the wars of tomorrow.

'At a time when threats to national and international security are increasing, Donald Stoker has produced a work vital to regaining the competence necessary to win in war. He exposes fundamental misunderstandings concerning the nature of ‘limited’ war - misunderstandings that have undermined America’s ability to fight, to defeat enemies, to consolidate gains, and to achieve sustainable outcomes consistent with war aims. This is a book that should be read not only by students of military and diplomatic history but also by those in government charged with the development of national security policy. Citizens of democratic nations should read Why America Loses Wars so that they might demand strategies that achieve outcomes in war consistent with vital interests and worthy of the costs in blood and treasure.'

H. R. McMaster - author of Dereliction of Duty: Lyndon Johnson, Robert McNamara, the Joint Chiefs of Staff, and the Lies That Led to Vietnam

'In Why America Loses Wars, Donald Stoker offers an impassioned, deeply informed, and all-too-convincing critique of certain US strategic practices since the 1950s. A bracing, powerful, even urgent argument against confused concepts of limited warfare. Highly recommended.'

'Donald Stoker's insistence that since Korea, America has been able neither to define limited war, nor to evolve a viable strategy to fight them is sure to ignite a lively debate.'

Douglas Porch - author of Counterinsurgency: The Origins, Development and Myths of the New Way of War

'Donald Stoker provides an insightful, sobering, and provocative study on what makes for victory in war and for the winning of peace. America’s frustrating and costly experience in recent wars underscores the timeliness and importance of Stoker’s analysis of today’s policy and strategy debates about the use of force by the United States on the world stage.'

John H. Maurer - author of The Outbreak of the First World War

'A withering critique of US political and military decision-making from Korea to Iraq and an audacious attempt to construct a useable theory of limited war for confronting contemporary conflict within a Clausewitzian paradigm - a thoughtful and provocative contribution.'

Edward B. Westermann - Retired Colonel and formerly of the US Air Force Academy

'Why America Loses Wars insightfully examines the strategic level of war. Written in an engaging style that carefully blends theory and practice, this thought-provoking book will be of real value to all concerned with studying and making war.'

'Stoker’s analysis of the United States’ failures is convincing.'

'Stoker's Why America Loses Wars is an ambitious book that does a superb job of serving as a starting point to a sorely needed conversation on current limited war strategy. Reading it should hopefully spark conversation among policymakers and strategy practitioners on how to approach Americas future wars.'

'… this is a book that every policy maker and military officer should read.'

'While reading Why America Loses Wars, one cannot escape a 'wish I had been there during his lectures' feeling. Stoker not only displays a rare clarity of thought but also equips readers with the analytical tools they need to better asses issues of (limited) war and strategy.'

'Reading this book would make a good starting-point for leaders interested in correcting seven decades of poor decision-making.'

‘The recommendations and insights in Why America Loses Wars deserve widespread circulation among strategists.'

‘Observing that wars for limited political objectives generally lead to negotiated outcomes, Stoker wisely contends that preparing for peace is just as important as fighting, and that such preparation requires a corresponding set of achievable political goals. Appropriate for those interested in international affairs, war, peace, and security studies.’

‘Why America Loses Wars will be of great interest to the general reader … The book deserves serious attention from scholars and policymakers alike.’

‘The book was very enjoyable and thoughtful. I would highly recommend it to anyone who works in or has interest in national security, modern military history, and military strategy.’