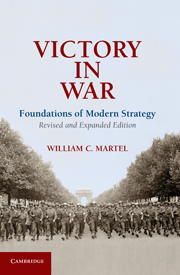 War demands that scholars and policy makers use victory in precise and coherent terms to communicate what the state seeks to achieve in war. The failure historically to define victory in consistent terms has contributed to confused debates when societies consider whether to wage war. This volume explores the development of a theoretical narrative or language of victory to help scholars and policy makers define carefully and precisely what they mean by victory in war in order to achieve a deeper understanding of victory as the foundation of strategy in the modern world.

“William Martel has written and expanded an exceptional work on a critical subject. His book, Victory in War, insightfully addresses an issue that has plagued our modern strategic decision makers. Since the end of World War II, they have failed to effectively and clearly define and articulate ‘victory’ in the conflicts we fought. This work has been brilliantly researched and presented. Martel’s book should be required reading for all those who set our strategic course and for all those who want to understand how this should be done.”
– General Anthony C. Zinni USMC (Retired)

“What does it mean to win a war? This question has never been more important than it is today, as ongoing conflicts in Iraq and Afghanistan raise existential questions about the meaning of victory. Yet among the hundreds of works of serious military theory from ancient times to the present, few writers have addressed this question directly, and none has done so systematically. In Victory in War, William Martel has produced an important work on a vitally important subject.”
– Fred Kagan, Resident Scholar, American Enterprise Institute

“Martel offers a comprehensive and theoretically guided analysis of the meaning of victory in war that takes one well beyond the accumulation of battlefield successes to a deep appreciation of all the dimensions victory has as a warfare goal. The framework he creates is valuable for both students of war and those who make it.”
– Harvey M. Sapolsky, Professor Emeritus and former Director of the MIT Security Studies Program

“William Martel has written a theoretical narrative of what the phrase ‘victory in warfare’ actually means. He points out throughout his excellent study that unless policy makers articulate in more precise and systematic language exactly what constitutes victory, that failure to do so usually results in a slow but steady erosion in support of any military effort. Small setbacks become major decisive turning points. Public support soon wavers. Martel’s book goes a long way toward correcting misconceptions about what it means to be victorious in war. I predict this book will become required reading for all students of national security affairs.”
– Charles P. Neimeyer, Director and Chief, USMC History, Quantico, VA

“Martel gives us an important book on a pressing subject of overriding importance to policy makers and military planners – namely, how do we define victory in the post-modern, post- heroic age of gritty little wars waged to stop regional bullies, terrorists, and other desperadoes?”
– Geoff Wawro, Professor of Military History, University of North Texas

“In this important and unfailingly intelligent book on the meaning and form of victory in war, William Martel fills a wide and sorely-felt lacuna in strategic theory. Developing and greatly expanding on the ideas of Sun Tzu, Clausewitz and Liddell Hart, he distinguishes between tactical, strategic and grand strategic victories and considers what it takes to achieve and sustain them. Stimulating and laying the ground for thought on the subtle interplay between aims and means required to achieve success in war, Victory in War is of crucial relevance to policy makers, strategists and scholars alike.”
– Azar Gat, Ezer Weitzman Chair of National Security, Tel Aviv University

“William Martel has provided a very useful summary of the thinking about and meaning of victory throughout history, which will enrich our discussions about the wars with which we are presently involved.”
– Robert D. Kaplan, Senior Fellow, Center for a New American Security