The Underground Railroad and the Geography of Violence in Antebellum America 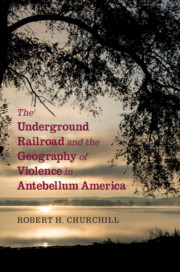 As runaway slaves fled from the South to escape bondage, slave catchers followed in their wake. The arrival of fugitives and slave catchers in the North set off violent confrontations that left participants and local residents enraged and embittered. Historian Robert H. Churchill places the Underground Railroad in the context of a geography of violence, a shifting landscape in which clashing norms of violence shaped the activities of slave catchers and the fugitives and abolitionists who defied them. Churchill maps four distinct cultures of violence: one that prevailed in the South and three more in separate regions of the North: the Borderland, the Contested Region, and the Free Soil Region. Slave catchers who followed fugitives into the North brought with them a Southern culture of violence that sanctioned white brutality as a means of enforcing racial hierarchy and upholding masculine honor, but their arrival triggered vastly different violent reactions in the three regions of the North. Underground activists adapted their operations to these distinct cultures of violence, and the cultural collisions between slave catchers and local communities transformed Northern attitudes, contributing to the collapse of the Fugitive Slave Act and the coming of the Civil War.

‘Churchill's portrayal of the ways in which the distinctively Southern culture of violence alienated Northern communities subject to invasion by slave catchers is exceptionally acute. Churchill has made a lasting contribution to the history of the complex phenomenon that was the Underground Railroad, the nation's first civil rights movement.'

Fergus Bordewich - author of Bound for Canaan: The Underground Railroad and the War for the Soul of America

Steven Lubet - author of The 'Colored Hero' of Harpers Ferry

‘A significant contribution to the literature on the Underground Railroad.'

‘Using court records, print media, and memoirs, Churchill depicts the pervasive nature of the violence that defined the relationship between fugitive slaves, bounty hunters, abolitionists, and the great many Northerners who wished no association with the culture of slavery.’

‘Considered together with the hundreds of individual stories of African American migrants and their interracial associates, this rich travel narrative framed by violence, intrigue, and self-determination enriches our understanding of the antebellum period.'

‘… excellent analysis … the book demonstrates that the movement operated within a diverse 'geography of violence,' which shaped the responses of northern whites. The Underground Railroaddraws insightful connections between geographically disparate regions through the lens of cultural violence.’