From Civilized Divorce to Uncivil War 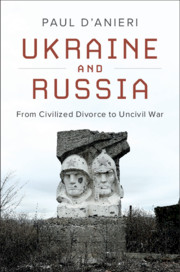 D'Anieri explores the dynamics within Ukraine, between Ukraine and Russia, and between Russia and the West, that emerged with the collapse of the Soviet Union and eventually led to war in 2014. Proceeding chronologically, this book shows how Ukraine's separation from Russia in 1991, at the time called a 'civilized divorce', led to what many are now calling 'a new Cold War'. He argues that the conflict has worsened because of three underlying factors - the security dilemma, the impact of democratization on geopolitics, and the incompatible goals of a post-Cold War Europe. Rather than a peaceful situation that was squandered, D'Anieri argues that these were deep-seated pre-existing disagreements that could not be bridged, with concerning implications for the resolution of the Ukraine conflict. The book also shows how this war fits into broader patterns of contemporary international conflict and should therefore appeal to researchers working on the Russia-Ukraine conflict, Russia's relations with the West, and conflict and geopolitics more generally.

‘Who or what is responsible for the war in Ukraine and the new crisis in the East-West relations? Paul D'Anieri is not looking for simple answers to this seemingly simple question. His response is rooted in the examination of the Russo-Ukrainian relations over the past thirty years and points to profound differences in the way Russian and Ukrainian elites understand and pursue their interests in the post-Cold War world. A work of great erudition, this book contributes to more than one field of study and is a must read for anyone who is interested in the origins of the current crisis.'

‘Uniquely balanced and rigorous in its in-depth consideration of Ukrainian, Russian, and Western sources and perspectives, D'Anieri's Ukraine and Russia should now be the first book one consults when seeking to understand the nature of today's conflict and possible paths forward.'

'Paul D’Anieri’s Ukraine and Russia: From Civilized Divorce to Uncivil Conflict, provides one of the first comprehensive accounts of Ukrainian-Russian relations after the collapse of the Soviet Union. D’Anieri masterfully weaves theoretical arguments about the nature of relations between states - not only Ukraine and Russia, but also the United States and 'the West' - with his deeply-researched historical narrative of these relations from 1989 to the present. Ambitiously, D’Anieri is not content to pick one theory or assign blame to one country for his account, but rightly moves his analysis between international and domestic factors to provide a comprehensive explanation of this history. Ukraine and Russia is a terrific read, of interest not only to social scientists and historians, but to anyone interested in understanding this tumultuous relationship.'

Michael McFaul - author of From Cold War to Hot Peace: A U.S. Ambassador in Putin’s Russia

'Fortunate readers get three books in one: the first major survey to look at the long cycle of conflict between Russia and Ukraine since 1991; a balanced assessment of this dynamic’s place within the general problems of the post-Cold War settlement; and a fascinating debate on realist and liberal attempts to explain the crisis.'

‘Although this book is rich in detail, it is very well laid out for the average reader wanting to understand how this new frozen conflict occurred. The author pulls no punches and lays out various arguments in a straightforward manner.’

‘… this volume offers a very detailed account of developments from the 1990s to 2019, covering agreements between the two states, the role of economic factors … this book provides a sophisticated analysis, supported by cogent facts, to understand this troubling conflict.’

‘Why have Ukraine and Russia been unable to develop a workable relationship since 1991? Paul D’Anieri answers this question by examining the development of ties between Kyiv and Moscow since the Soviet collapse, and placing them in the broader context of Ukraine’s and Russia’s relations with the United States and the European Union.’

‘D’Anieri takes on the elementary but heavily loaded task of explaining ‘how and why this conflict came about’ (p. 2) and delivers a non-partisan, thoughtful and thorough analysis.’

‘… this intensively researched and engagingly written book is a necessary and timely addition to the post-Cold War literature. Scholars of IR will be indulged by D'Anieri's skilful overview of IR theories, while policy makers will find invaluable insights into the effective management of security dilemmas … this broadly conceived and well-synthesized book represents interdisciplinary scholarship at its best.’