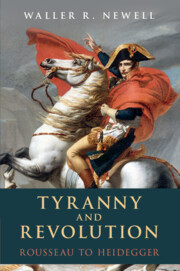 The Philosophy of Freedom from Rousseau to Heidegger launched a great protest against modern liberal individualism, inspired by the virtuous political community of the ancient Greeks. Hegel argued that the progress of history was gradually bringing about greater freedom and restoring our lost sense of community. But his successors Marx, Nietzsche and Heidegger rejected Hegel's version of the end of history with its legitimization of the bourgeois nation-state. They sought to replace it with ever more utopian, apocalyptic and illiberal visions of the future: Marx's Socialism, Nietzsche's Overman, and Heidegger's commitment to Nazism. This book combines an exceptionally clear and rich study of these thinkers with a deep dive into the extent to which their views fed the political catastrophes of revolution, tyranny and genocide, including the Jacobins, Bolsheviks, Nazis, Khmer Rouge, ISIS and populist nationalism, but argues that the Philosophy of Freedom remains indispensable for understanding today's world.

‘This is the best study we have of the problems and paradoxes of the German philosophy of freedom, from Rousseau to Heidegger. Newell is a master communicator of deep and complex ideas. His readings bring clarity and coherence to notoriously difficult works. Newell's book stands as an admirable companion and update of Karl Lowith's classic study From Hegel to Nietzsche.'

‘Utterly profound and urgently immediate. It shows how and why our major political attempts to find a life that is more communal, noble, free, meaningful and dignified than the pursuit of mere material self-interest have led, paradoxically, not to more freedom, connection, and dignity, but to powerful extremist longings which emboldened revolutionary tyrannies to practice utopian genocide and terror, to build slave states and to crush freedom and the soul, and how these same longings for a better life are at this moment inflaming anti-liberal authoritarian tendencies in the democracies. One puts this volume down changed, and in awe.'

Norman Doidge MD - author of The Brain That Changes Itself

‘Revolution, terror and violence have shadowed modernity. As Newell demonstrates in this demanding study, philosophers have contributed to raising this monster by arguing that only a changed politics would bring us true happiness – a happiness that classical liberalism with its defense of negative liberty, serving the pursuit of self-interest, could not provide. This brilliant work should generate heated discussions, especially the long chapter on Heidegger.'

‘Anyone who imagined that liberal democracy would have an easy run in the twenty-first century surely realizes that was a vain fantasy. With new anti-liberal ideologies on the rise, Newell's animating question – ‘How could the desire to ennoble modern life lead to the political catastrophes of totalitarianism and utopian genocide?' – seems more timely than ever.'

‘Like all Waller Newell's books, this one is bold and dramatic, presenting a sweeping new perspective on the types of political thinking since Rousseau that have confronted liberal constitutionalism with its most provocative intellectual challenges and its gravest revolutionary upheavals.'

'This book is a remarkable capstone and a formidable tour de force. With clarity, elegance, and depth, Waller Newell illuminates how and why some of the greatest modern philosophers since Rousseau, who aroused such fervent hopes for the future of humanity, instead caused those inspired by their thought to produce some of the worst catastrophes in human history: tyranny and genocide on an unprecedented scale. Newell manages to persuasively unravel the riddle, explaining it brilliantly and powerfully, while also clarifying the challenge that the West faces if it is to assure itself of a better future.'

'Professor Newell swings gracefully from one great thinker to another, lightening his vast learning with wit and pop-culture analogies. Amid the luxuriant concepts, Newell opens sudden vistas of perfect clarity, explaining how Nietzsche’s “death of God” happened: ‘…the God of the Torah was still a person - he walked in the Garden, he was capable of love, jealousy and vengeance … All of these traits that made God a person had to be eradicated. In other words, God had to be sacrificed for the Idea of God'.'