The Russian Conquest of Central Asia 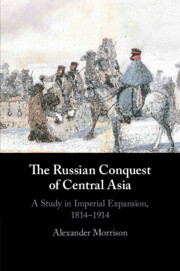 The Russian conquest of Central Asia was perhaps the nineteenth century's most dramatic and successful example of European imperial expansion, adding 1.5 million square miles and at least 6 million people - most of them Muslims - to the Tsar's domains. Alexander Morrison provides the first comprehensive military and diplomatic history of the conquest to be published for over a hundred years. From the earliest conflicts on the steppe frontier in the 1830s to the annexation of the Pamirs in the early 1900s, he gives a detailed account of the logistics and operational history of Russian wars against Khoqand, Bukhara and Khiva, the capture of Tashkent and Samarkand, and the bloody subjection of the Turkmen, as well as Russian diplomatic relations with China, Persia and the British Empire. Based on archival research in Russia, Kazakhstan, Uzbekistan, Georgia and India, memoirs and Islamic chronicles, this book explains how Russia conquered a colonial empire in Central Asia, with consequences that still resonate today.

‘In a masterful work of history and historiography, Morrison demolishes the ‘Great Game' story of Russia's expansion, so entrenched in English language scholarship. His long-duree account of Russia's Central Asia conquests offers compelling narrative, deep dives into camels and weapons, and comparisons of battles and encounters from the pens of Central Asian participants and observers as well as the far more abundant Russian accounts.'

‘This wonderfully intelligent, original and well-written book is based on years of meticulous research conducted in many languages in archives across Eurasia, some of them previously almost inaccessible to foreign historians. Not only does it offer unique insights into the thinking of Russian policy-makers, it also adds crucially to our understanding of nineteenth-century European imperialism. This work should transform the Anglophone world's understanding of the ‘Great Game'.'

‘The Russian Conquest of Central Asia is a major work. Based on the supreme command of a large body of material, scattered across a dozen archives between present-day Russia, Uzbekistan, Georgia, and Kazakhstan, Morrison's book is destined to have a deep and long-term impact on the field of Russian imperial history, the comparative history of colonialism in Asia, and Central Asian history.'

‘Alexander Morrison's The Russian Conquest of Central Asia provides a detailed and comprehensive account of how and why the Russians came to conquer this vast territory in the century between the end of the Napoleonic Wars and 1914.’

'The book delivers a comprehensive and much-needed analysis of the conquest of Central Asia and its place in the history of nineteenth-century global expansions.'