Home
A Tattoo on my Brain

A Tattoo on my Brain 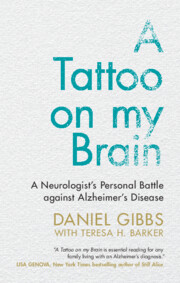 Dr Daniel Gibbs is one of 50 million people worldwide with an Alzheimer's disease diagnosis. Unlike most patients with Alzheimer's, however, Dr Gibbs worked as a neurologist for twenty-five years, caring for patients with the very disease now affecting him. Also unusual is that Dr Gibbs had begun to suspect he had Alzheimer's several years before any official diagnosis could be made. Forewarned by genetic testing showing he carried alleles that increased the risk of developing the disease, he noticed symptoms of mild cognitive impairment long before any tests would have alerted him. In this highly personal account, Dr Gibbs documents the effect his diagnosis has had on his life and explains his advocacy for improving early recognition of Alzheimer's. Weaving clinical knowledge from decades caring for dementia patients with his personal experience of the disease, this is an optimistic tale of one man's journey with early-stage Alzheimer's disease.

‘As a neurologist with early-stage Alzheimer's, Dr Daniel Gibbs offers a uniquely insightful, candid, and compassionate view from both seats. A Tattoo on My Brain is essential reading for any family living with an Alzheimer's diagnosis.’

Lisa Genova - New York Times bestselling author of Still Alice and Remember: The Science of Memory and the Art of Forgetting

‘The patient perspective in Alzheimer’s is often sorely missing from international dialogue and debate about this demon disease. Dr Daniel Gibbs, whom I’m honored to call a friend in this journey, has connected the serpentine dots between the patient and the medical profession in his brilliant work, A Tattoo On My Brain. As a retired neurologist and now a patient, Dr Gibbs writes with great passion, knowledge and perseverance. His resolve reminds me of William Ernest Henley’s poem Invictus: “My head is bloody, but unbowed.” A Tattoo On My Brain is a must read for the world.’

Greg O’Brien - author of On Pluto: Inside the Mind of Alzheimer’s

‘When a neurologist experiences a so-called neurodegenerative condition such as Alzheimer’s or Parkinson disease they are often equipped uniquely to provide insight into a condition that non-medically qualified patients may lack. In this unique work, A Tattoo on my Brain Dr Gibbs tracks in meticulous detail the earliest symptoms of what was diagnosed subsequently as Alzheimer’s disease. This work will have major appeal to lay people, especially those caring for an affected family member but also to neurologists, neuropsychologists and those involved in trial of new medications.’

‘Dr. Gibbs provides a first-hand account of his journey as a neurologist living with early-stage Alzheimer’s that is thoughtful, educational, humorous and poignant. I highly recommend this book to patients and families living with Alzheimer’s, and to doctors and scientists dedicated to studying the disease and developing new therapies.’

'A Tattoo on My Brain describes Dr. Daniel Gibbs’ amazing journey from neurologist to patient living with Alzheimer’s disease. Clues crop up along the way, a genetic marker for Alzheimer’s, strange odors and memory glitches that tipped him off that his brain was starting to malfunction. He underwent advanced brain scans that showed the buildup of amyloid plaques and he joined a clinical trial to remove them. He vividly describes the side-effects that briefly turned his world upside down. But Dr. Gibbs emerges from this odyssey in good shape, with wisdom and reflection urging readers to learn about their risk for Alzheimer’s disease and take steps to prevent it.'

‘… profoundly moving … his memoir is a symbol of resistance that has muted the conversation about Alzheimer's among patient and doctors, family members and as a society.’