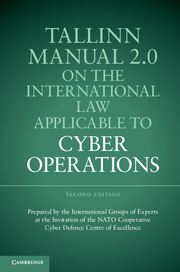 Tallinn Manual 2.0 on the International Law Applicable to Cyber Operations
Buy print or eBook[Opens in a new window]

from Part II - Specialised regimes of international law and cyberspace

Cyber operations on the high seas may be conducted only for peaceful purposes, except as otherwise provided for under international law.

Rule 46 – The right of visit and cyber operations

A warship or other duly authorised vessel may exercise the right of visit to board a vessel without flag State consent on the high seas or within an exclusive economic zone if it has reasonable grounds for suspecting the vessel is utilising cyber means to engage in piracy, slave trading, or unauthorised broadcasting; appears to be without nationality; or is of the nationality of the visiting vessel.

In order for a vessel to claim the right of innocent passage through a coastal State’s territorial sea, any cyber operations conducted by the vessel must comply with the conditions imposed on that right.

Rule 49 – Cyber operations in the territorial sea during armed conflict

During an international armed conflict, a neutral coastal State may not discriminate between the belligerents with respect to cyber operations in that State’s territorial sea.

With respect to vessels located in a coastal State’s contiguous zone, that State may use cyber means to prevent or address violations within its territory or territorial sea of its fiscal, immigration, sanitary, or customs laws, including violations perpetrated by cyber means.

Cyber operations in a strait used for international navigation must be consistent with the right of transit passage.

Cyber operations in archipelagic waters must be consistent with the legal regime applicable therein.

561 The consent of the coastal State is required for establishment in the territorial sea as it exercises sovereignty over that area and its seabed (Rule 2). As to establishment in the EEZ, see Law of the Sea Convention, Art. 60(1–2), specifically the reference to installations and structures for economic purposes.

566 Law of the Sea Convention, Art. 109(2). The Experts noted that, with respect to the reference to ‘international regulations’ in Article 109(2), no such regulations had been adopted at the time of adoption of the Manual.

569 Note also that the Experts agreed that as a general matter, the transmission of propaganda does not constitute a prohibited intervention as it is not coercive in nature (Rule 66).

578 Article 58(2) of the Law of the Sea Convention applies the principle of peaceful purposes to the EEZ.

584 See, e.g., Law on the Territorial Sea and the Contiguous Zone of the Republic of China, Arts. 6, 7 (25 February 1992); Act on the Marine Areas of the Islamic Republic of Iran in the Persian Gulf and the Oman Sea, Art. 9 (2 May 1993). A number of other States also seek to impose this requirement on warships. For a collection of maritime claims in this and other regards, see, Maritime Claims Reference Manual, DoD Representative for Ocean Policy Affairs, 5 November 2014.

587 The text ‘that is not internal to the ship and its systems’ acknowledges that cyber weapons testing may be limited to the vessel itself, specifically the cyber infrastructure therein. The International Group of Experts agreed that since such an activity had no effect beyond the vessel, it does not render passage non-innocent.

601 See, e.g., United Nations Convention on the Law of the Sea 1982: A Commentary, University of Virginia Center for Oceans Law and Policy (Myron H. Nordquist, et al., eds. 2011) (limiting the grounds to the four enumerated in Article 27.). But see R. R. Churchill & A. V. Lowe, The Law of the Sea 97 (3rd edn 1999) (suggesting that use of the term ‘should not be exercised’ in the Article was intended to indicate that the grounds therein are not exhaustive).

603 Law of the Sea Convention, Art. 27(5). In such a case, however, authorities may act nonetheless to enforce exceptions contained in Part XII of the Law of the Sea Convention concerning certain criminal matters relating to marine environmental protection, as well as criminal matters relating to living and non-living resources – most prominently fishing – in the EEZ.

611 But only on the seaward side of any baseline; there is no right of transit passage in internal waters. Law of the Sea Convention, Art. 35(a).

633 Law of the Sea Convention, Art. 56. The International Group of Experts noted, however, that while this may be the case in the law, a number of States subject such cable laying activities to consent requirements. See, e.g., People’s Republic of China, Ministry of Commerce, Provisions Governing the Laying of Submarine Cables and Pipelines, Art. 4 (11 February 1989); India, Territorial Waters, Continental Shelf, Exclusive Economic Zone and other Maritime Zones Act, Art. 7, (25 August 1976).

638 For instance, offshore wind farms that effectively prevent a large area from being used for cable laying because manoeuvring a maintenance vessel among the pylons will be difficult or dangerous might arguably fall within this prohibition.

646 1884 Cable Convention, Art. 10. In 1959, the United States invoked Article 10 to board and investigate the Soviet trawler Novorossiisk for damaging five transatlantic cables. With the master’s consent, a US warship inspected the vessel, and determined that there was a ‘strong presumption’ that the Novorossiisk violated the proscription in Article 2 of the Convention against intentional, wilful, or culpably negligent breaking or injuring a submarine cable. See The Novorossiisk, Dept. of State Bull. (20 April 1959), Vol. 40, No. 1034, at 555.