Home
Systemic Earthquake and the Struggle for World Order

Systemic Earthquake and the Struggle for World Order 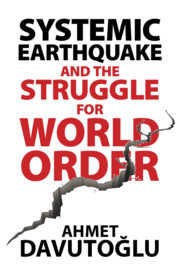 Using the analogy of a devastating series of earthquakes, Davutoğlu provides a new theoretical approach, conceptualization, and methodology for understanding crisis in the post-Cold War era. In order to grasp the scale and scope of the ongoing crises we are experiencing today, Davutoğlu conceptualizes them as 'aftershocks', following in the wake of the four great 'quakes' that have shaken the world in recent times - namely, the geopolitical earthquake triggered by dissolution of the Soviet Union, 1991; the security earthquake, post- 9/11, 2001; the economic earthquake associated with the global economic crisis, 2008; and the structural earthquake of the Arab Spring, 2011. By contextualizing international order as being impacted by a number of intertwined processes, the book then looks to the possible futures ahead. Following his analysis of the ongoing systemic crisis, Davutoğlu forges a vision for a new order of global democracy, built from the rubble of the systemic earthquake.

‘In our time of extreme political chaos and confusion, Davutoğlu's book is a model of sane analysis and judgment. In his view, politics always involves an interplay of human policies and structural constraints; when one or all of these factors shift dramatically, we are faced with ‘seismic' or ‘systemic earthquakes'. Since World War II the book detects at least four such seismic upheavals in the fields of geopolitics, national security, economics, and civic cohesion. More recently, these upheavals have coalesced into the basic collision between friend and enemy, between 'populist exclusion' and ‘democratic inclusion'. As Davutoğlu forcefully argues, the major need today is to move from unilateralism to an inclusive and comprehensive paradigm of governance - an argument which importantly is not just the result of book learning but the fruit of his concrete public service extending over several decades.'

‘Dr. Ahmet Davutoğlu has been an important figure of Turkish and international politics for the past twenty years but at heart he is first and foremost an academic and a thinker. This is on full display in this new book. Systemic Earthquake offers a compelling analysis of the crises at work in the world of today and possible solutions for the way forward. The book, building on decades of academic research and policy engagement, is a history and mapping out of key current geopolitical issues and helps bringing much needed intellectual clarity on them.'

‘Ahmet Davutoğlu, prominent academic, former Foreign Minister and Prime Minister of Turkey, has written a challenging critique and ground-breaking response to what he describes as today's ‘world disorder'. Systemic Earthquake and the Struggle for World Order: Exclusive Populism versus Inclusive Democracy offers a comprehensive history of globalization's role and in addressing what went wrong and a detailed agenda for its transformation rooted in a new paradigm of global order based on inclusive global governance.'

'… the psychology of arrogance arising from a privileged status drove rational diplomacy off the road.' With this remark about the resistance of great powers to change in the world order and international decision-making, Ahmet Davutoğlu concludes the chapter in which he analyses the joint Turkish-Brazilian efforts to find a solution to one of the most critical problems that beset peace and security in the contemporary world; the Iranian nuclear program. It might well be an epigraph for this magnificent book, written by a man who is a rare combination of a political analyst of enormous historical culture and an action-oriented statesman guided by a deeply humanistic conviction on the value of peace and cooperation among nations. Systemic Earthquake and the Struggle for World Order will be an essential reading for anyone interested in saving our world from war or ecological disaster.'

'Few are better placed than Ahmet Davutoğlu to make sense of the momentous events shaping the Middle East, with possible ramifications for the whole world. His analytical ability, wide experience and knowledge are lucidly combined in this book which is accessible to both scholars and those with a general interest in the region.'