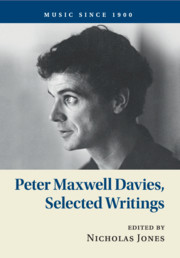 This book brings together an extensive and varied collection of Sir Peter Maxwell Davies's written and spoken-word items for the first time. Spanning the composer's entire career, this compendium offers a balanced selection of Davies's articles and essays, speeches and lectures, interviews, radio broadcasts, programme notes, tributes and letters to newspapers. A number of items are published for the first time, including a new article from Davies himself (commissioned specially for this book), and several BBC radio broadcast interviews and talks from the 1960s. The structure of the book is chronological and divided into three parts, allowing readers to trace the development of Davies's thought and work over time, and to place each item in its biographical and historical context. The introduction and notes by Nicholas Jones place the writings in context, making this volume invaluable for those interested in the music and wider culture of post-war Britain.

This bibliography is an updated version of the checklist of source material published in Peter Maxwell Davies Studies.1 It is divided into the following sections: (1) Academic writings; (2) Articles, essays and letters to journals and newspapers; (3) Lectures and speeches; (4) Libretti and texts; (5) Interviews: (a) Books, journals, theses and online written sources; (b) Newspapers; (c) Television, online videos and CD recordings; and (6) Radio broadcast talks and interviews: (a) British Library and BBC Sound Archives; (b) BBC Radio International. Programme notes are not included; neither are Davies’s private letters or his sixty-four volumes of private journals and diaries (the journals and diaries have been deposited at the British Library but are currently under embargo by Davies’s Estate). The content of each category is arranged in chronological order.

The following items are available to listen to at the British Library Sound Archive [BLSA] and the BBC Sound Archive [BBCSA]; the LP/Tape/CD catalogue number is given for each item.

The following items have not yet been added to the existing catalogues. However, the British Library Listening and Viewing Service can be contacted with details of the title and broadcast date of any BBC broadcast post-1992 and they will attempt to retrieve a copy for listening from the BBC.

The following radio programmes, available from BBC Radio International (formerly BBC Transcription Service), can be listened to at the British Library Sound Archive. These discs were made for overseas broadcast and are not dated in the same way as conventional radio broadcasts.