Adah Isaacs Menken and the Birth of American Celebrity 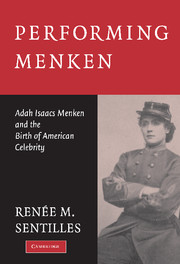 This book was first published in 2003. Performing Menken uses the life experiences of controversial actress and poet Adah Isaacs Menken to examine the culture of the Civil War period. Menken managed to portray herself as both respectable and daring, claiming for herself various (differing) racial and ethnic identities. Playing male roles on stage, she became the reigning femme fatale. Yet she was also known as an intellectual, publishing poetry and essays. She shared friendships with the greatest writers of her time, including Walt Whitman, Mark Twain, and Alexandre Dumas, père. Performing Menken also looks at what Menken's choices reveal about her period. It explores the roots of the cult of celebrity that emerged from the crucible of war. While discussing Menken's racial and ethnic claims and her performance of gender and sexuality, Performing Menken focuses on contemporary use of social categories to explain patterns in America's past and considers why such categories appear to remain important.

"This is a most interesting and valuable study of a performer, of a woman, and of a particular cultural movement." John W. Frick, American Historical Review

"Renee Sentilles has written a scintillating book about a fascinating character. Adah Isaacs Menken was a poet, actress, publicity hound, and self-proclaimed bohemian who invented and re-invented herself dramatically in the middle years ofthe nineteenth century. This book finally puts 'the Menken,' as she was known at the peak of her fame, in the contexts that help us to understand her: the rise of celebrity culture, the shifting terms of gender, religious, and racial identity, changing public standards of taste, and the new America that was emerging during and after the Civil War." Joy Kasson, Univerisy of North Carolina at Chapel Hill

"Vividly written, analystically sophisticated, and thoroughly fascinating, this book will be important to readers interested in cultural history, women's studies, American studies, and theater history, as well as to everyone who likes a gripping story." Joy Kasson, University of North Carolina at Chapel Hill

"In Menken's story, Renee Sentilles carries off a bravura performance of her own. Cutting her way through the numerous tales Menken told about herself, Sentilles discovers in her subject a revealing mirror of America in the Victorian age. That society, she shows with insight and wit, was far less rigid than is customarily assumed, and Menken capitalized on its desire for entertainment and its openness to change. With a chameleon-like talent for moving from one social world to another and remaking her self to fit her surround, Menken emerges as the hero of a very American adventure: a pioneer on the frontiers of identity, in an extraordinary tale of self-invention fit for a post-modern age." Robert A. Gross, College of William and Mary

"In capturing Menken's creations and revealing their cultural resonances for her time and our own, Performing Menken is at once enlightening and entertaining. Sentilles commands notice as a rising star in the interdisciplinary field of American studies.Encore!" Robert A. Gross, College of William and Mary

"A useful model of interdisciplinary research and analysis, the book is also a nuanced and insightful study of the agency of a particular woman at a contentious, complex, and rapidly changing moment in American history. Sentilles has seized on an utterly compelling figure in American culture and shown us how the culture may be more fascinating than the notoriously sensational actress-poet herself." Legacy