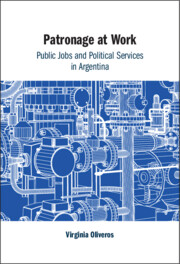 In countries around the world, politicians distribute patronage jobs to supporters in exchange for a wide range of political services – such as helping with campaigns and electoral mobilization. Patronage employees (clients) engage in these political activities that support politicians (patrons) because their fates are tied to the political fate of their patrons. Although conventional wisdom holds that control of patronage significantly increases an incumbent's chance of staying in power, we actually know very little about how patronage works. Drawing on in-depth interviews, survey data, and survey experiments in Argentina, Virginia Oliveros details the specific mechanisms that explain the effect of patronage on political competition. This fascinating study is the first to provide a systematic analysis of the political activities of mid and low-level public employees in Latin America. It provides a novel explanation of the enforcement of patronage contracts that has wider implications for understanding the functioning of clientelist exchanges.

'Although clientelism and vote buying have been widely studied in Latin America, the central role of public sector employees in the discretionary, patronage-based distribution of public services for partisan gain has never received the attention it deserves. Virginia Oliveros corrects that oversight in this pathbreaking book on political patronage in Argentina, and she employs rigorous empirical methods to explain why it is in the self-interest of party brokers and clients to uphold their end of the bargain. This book sheds new light on the alignment of interests that not only make patronage work, but also help it to endure – and it thoroughly dissects the implications of partisan patronage for the quality of democratic representation and governance.'

'Oliveros poses the question, if patronage is an exchange of favors (from the employer) for political support (from their public-sector workers), what keeps the workers from reneging on their side of the bargain? More than fear of being fired, they understand that their own fate is tied to their boss’s – if he or she loses an election, they are out of a job. With a range of cutting-edge social-science techniques, Oliveros paints a clear picture of patronage in Argentina, and beyond, and tests her theory against plausible rival ones. Patronage at Work is a must read for students and scholars interested in clientelism, patronage, and distributive politics, political development, and Latin American politics.'

'Virginia Oliveros provides an essential reading for all scholars interested in the use of patronage for political gain. This is the most sophisticated and best documented research on patronage politics, presenting overwhelming evidence that partisan public employees can benefit their employers and also provide a higher level of effort on the job. Indeed, away from prior simplifications, patronage can have negative effects on democratic representation and also provide a higher level of service to voters. Now, that is something worth discussing!'

Ernesto Calvo - Professor of Government and Politics, University of Maryland