Home
On a Knife Edge

On a Knife Edge 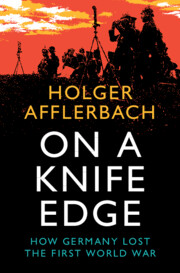 Was the outcome of the First World War on a knife edge? In this major new account of German wartime politics and strategy Holger Afflerbach argues that the outcome of the war was actually in the balance until relatively late in the war. Using new evidence from diaries, letters and memoirs, he fundamentally revises our understanding of German strategy from the decision to go to war and the failure of the western offensive to the radicalisation of Germany's war effort under Hindenburg and Ludendorff and the ultimate collapse of the Central Powers. He uncovers the struggles in wartime Germany between supporters of peace and hardliners who wanted to fight to the finish. He suggests that Germany was not nearly as committed to all-out conquest as previous accounts argue. Numerous German peace advances could have offered the opportunity to end the war before it dragged Europe into the abyss.

'All future historians of the First World War will have to engage with Holger Afflerbach's important and authoritative book, and his powerful and provocative case that the conflict was more of a ‘close run thing' than previously thought.'

‘A fascinating and provocative account – Afflerbach argues that the First World War could have ended in a draw and that the German leadership committed serious mistakes to lose it.'

Annika Mombauer - author of The Origins of the First World War

‘Holger Afflerbach provides a comprehensive reassessment of Germany's conduct of the 1914-18 war. Drawing on fresh archival sources and an impressive command of the immense secondary literature, he offers a thought-provoking reappraisal of the entire history of that terrible conflict.'

David Stevenson - author of With Our Backs to the Wall: Victory and Defeat in 1918

'Boldly argued and beautifully written, Holger Afflerbach's On a Knife Edge vividly portrays Germany's strategic desperation in 1914-18 and reveals how the Allies' uncompromising pursuit of total victory radicalised the conflict and destroyed all hope of a lasting peace.  Thought-provoking and sure to spark controversy – this is one of the most important and exciting new interpretations of the First World War!'

Alexander Watson - author of Ring of Steel: Germany and Austria-Hungary at War, 1914-1918

‘WWI scholars and enthusiasts will relish this exhaustive deep dive.'

'… a highly readable account not only of the German side of the war but to some extent a retrospective on the war as a whole, one both enthusiasts and specialists can enjoy and fruitfully debate.’

‘This book is a political study of Germany’s war effort, not a campaign narrative, though it tells the 1914–18 story very well … Afflerbach gathers many strands into a coherent argument, and offers a host of details that are likely to be unfamiliar even to veteran students of the conflict.’

‘… a revisionist spin … Afflerbach argues that Germany’s defeat in 1918 was not inevitable. It could have gone either way on the battlefield, but internal turmoil was to blame for the defeat, leading to a peace not ‘based on justice but instead … too harsh’.'