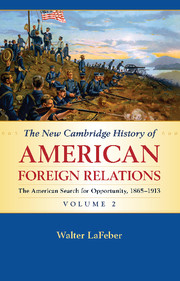 Since their first publication, the four volumes of the Cambridge History of American Foreign Relations have served as the definitive source for the topic, from the colonial period to the Cold War. This second volume of the updated edition describes the causes and dynamics of United States foreign policy from 1865 to 1913, the era when the United States became one of the four great world powers and the world's greatest economic power. The dramatic expansion of global power during this period was set in motion by the strike-ridden, bloody, economic depression from 1873 to 1897 when American farms and factories began seeking overseas markets for their surplus goods, as well as by a series of foreign policy triumphs, as America extended its authority to Cuba, Puerto Rico, the Panama Canal Zone, Central America, the Philippines and China. Ironically, as Americans searched for opportunity and stability abroad, they helped create revolutions in Central America, Panama, the Philippines, Mexico, China and Russia.

‘The American Search for Opportunity is vintage LaFeber: provocatively conceived, forcefully argued, and beautifully written. In this revised edition, LaFeber has retained and strengthened his arresting thesis that U.S. policy makers, prompted by a search for markets and flawed racial views, aggressively pursued opportunity and informal empire abroad at the expense of international order and stability.’

‘This is a masterful account of the United States’ rise to global power by one of the most eminent scholars of U.S. foreign relations. Drawing on the latest scholarship and original research, Walter LaFeber eloquently demonstrates how U.S. economic expansion wreaked havoc around the world. He also shows that the disorder created by U.S. political and industrial leaders abroad gave rise to an imperial presidency at home. This thought-provoking book is essential reading for anyone interested in U.S. hegemony in a globalizing world - and the effects of globalization on the United States.’

‘No one has done more to revolutionize our thinking about U.S. foreign policy in the era following the Civil War than Walter LaFeber. His path-breaking The New Empire demonstrated how those years set the stage for America’s twentieth-century career as a world power. The American Search for Opportunity, 1865–1913 not only takes that story beyond 1898, it highlights what a powerfully destabilizing and unsettling experience for other lands American expansion into the world has often been. Professor LaFeber addresses compellingly an issue that students of the past, and citizens of the present, would do well to give much greater attention.’

‘The American Search for Opportunity, 1865–1913 is much more than a survey of U.S. foreign policy from the Civil War to World War One. It is an elegant interpretive essay. LaFeber argues boldly and persuasively that the relentlessness of the U.S. search for global economic opportunities jostled societies as disparate as Russia and Haiti, inspiring revolution and turmoil around the world.’