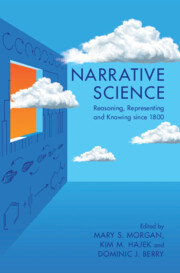 Narrative Science
Reasoning, Representing and Knowing since 1800
Buy print or eBook[Opens in a new window]

We began the Narrative Science Project with the aim of finding and analysing narratives as they occurred in the disparate and varied sites offered across the terrain of as many natural/physical/human/social sciences as we could. We did not aim to be comprehensive, for science exists in too many guises, and nor did we assume all science was narrative. But as our project progressed we came to recognize both how surprisingly widespread narratives were in science, and how they are shown in diagrams, maps and equations as well as told in texts, protocols, books and journal articles. We did not aim to impose an account of narrative onto science, but rather to explore the different narrative formats that scientists use, and the different functions that narrative fulfils for those scientists. We did not aim to create a well-researched map, but our detailed case-work created a picture with the features of a medieval tapestry: exhibiting both the detailed texture of many individual science narratives and the amazing spread of how narrative appears in science.

Our second starting ambition was to persuade both literary communities who study narrative, and science studies communities who study science, ‘to take narrative science seriously’. This caused us to walk several tightropes at once. First, we were all too conscious – from typical reactions – that putting narrative and science together is problematic, for narrative is almost automatically associated with stories, and thence with something fictional. To mitigate this, we have largely kept to the terminology ‘narrative’. Second, was the tendency to assume that we were interested in narrative as a public engagement device that enabled the public to understand science, whereas we were interested in how scientists use narrative within their own communities, scientist-to-scientist, for their own purposes. Third, literary scholars sometimes assumed that either our interests were focused on factual narratives, or on the literariness of scientific prose. Narratives in science may be about facts, but may be about theories, or even both at once, and we were not primarily interested in literary qualities or the range of literary devices used by scientists. Instead, our engagement with the narrative community has been to understand how narrative functions to create joined-up accounts of things in particular domains (in our case, the various domains of science), and in what makes such relatedness ‘tellable’. Fourth (although this only became clearly evident as we went along), our interests covered not just the predictable places of narrative in reporting the process of scientific research activities and outcomes, or the life histories of scientific phenomena, but the ways in which narrative plays an important role in doing science. Thus, to our constituencies in history and philosophy of science, we propose that narrative-making shows its power in making sense of a phenomenon, and in so doing becomes a part of scientific reasoning, argument and inference.

What became the ‘our’ in our team is a critical part of our narrative-science project. We assembled a ‘home team’ from history and philosophy of science and literary studies (each person also held knowledge of at least one science field) and drew extensively on the help of intellectual interlocuters from the pre-history of the project. These conversations go back to an early meeting (in 2013), generously hosted by Raine Daston at the Max Planck Institute of the History of Science, and forward to the special issue of SHPS (published in 2017). Then, over the five years of our project time (2016–21), ‘our team’ widened to embrace an incredible range of scholars who came to deliver seminars, provided papers at our specialist workshops, joined us in specially constructed symposium sessions at conferences, and who contributed cases and commentaries to our Anthologies and working papers. Together they constituted a community extending and enriching the Narrative Science Project in creating both this book and the multiple further resources on our project website www.narrative-science.org/. Without them, our narrative science tapestry would be restricted in range, thin in colour and lacking depth of conviction. We thank them all below (and apologize if our listing misses any of our wider team!), as well as the ‘anonymous’ reviewers of our book chapters and the book as a whole.

Puzzles and Problems of Classifying and Categorizing

Narrative Science and Its Visual Practices

Speakers in the Public Seminar Series