Home
A Liberal Theory of Property

A Liberal Theory of Property 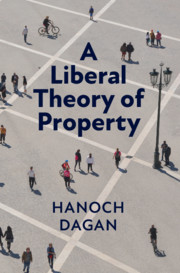 Property enhances autonomy for most people, but not for all. Because it both empowers and disables, property requires constant vigilance. A Liberal Theory of Property addresses key questions: how can property be justified? What core values should property law advance, and how do those values interrelate? How is a liberal state obligated to act when shaping property law? In a liberal polity, the primary commitment to individual autonomy dominates the justification of property, founding it on three pillars: carefully delineated private authority, structural (but not value) pluralism, and relational justice. A genuinely liberal property law meets the legitimacy challenge confronting property by expanding people's opportunities for individual and collective self-determination while carefully restricting their options of interpersonal domination. The book shows how the three pillars of liberal property account for core features of existing property systems, provide a normative vocabulary for evaluating central doctrines, and offer directions for urgent reforms.

'A Liberal Theory of Property is grand theory at its best. Hanoch Dagan has given us a deep theory that grounds property on the core liberal value of autonomy, more specifically, self-determination. Reciprocal self-determination is the foundation for two main pillars of his theory – structural pluralism and the right to be included. Dagan uses those two pillars to support a sweeping analysis of many property doctrines, ranging from fair housing laws to the numerus clausus principle. This is an enormously important contribution to property law and to liberal theory generally.'

'In this sophisticated and thought-provoking work, Dagan reimagines property as an instrument for self-authorship and self-determination. His careful and profound autonomy-based account is an essential work of property theory.'

'This is an outstanding work of scholarship and research by one of the most prominent academics in the field. It presents a coherent, comprehensive view of property that sheds new light on how we should conceptualise it and view its role in contemporary society. It has greatly influenced my thinking and understanding of the subject.'

'Hanoch Dagan makes a powerful case for a liberal theory. Such a theory can only be a legal theory and must be committed to the telos of the political philosophy of liberalism, namely self-authorship. Critically, individuals write and rewrite their own life in relation with others; property rights are therefore necessarily bounded, contestable and subject to change. This is a masterpiece and an intriguing counter-narrative to new socialism as an alternative to the current economic and legal order.'

'Hanoch Dagan offers a bold and nuanced account of property as an instrument for promoting autonomy in liberal societies. In doing so, he brilliantly challenges the economically oriented theorizing about property that is central to contemporary property scholarship.'

'Mainstream approaches are often deploying sophisticated arguments to only justify ideas we already know, so to legitimize existing legal regimes. At first, Dagan's book seems no exception, there is nothing new in attempting to ground property entitlements on personal autonomy. But the way he does it is path breaking. In Dagan’s hands, Property is not a given legal regime, but a set of structurally plural regimes, including the ones we wish to invent. Autonomy does not only focus on owners, but turns also to non-owners as well. It results in a theory of reciprocal justice, for after property has disintegrated. Some will think his conclusions are still too mainstream, but the point is that, thanks to him, the mainstream will have changed.'

‘The book shows how the three pillars of liberal property account for core features of existing property systems, provide a normative vocabulary for evaluating central doctrines, and offer directions for urgent reforms.’