Home
The Law of Political Economy

The Law of Political Economy

Transformation in the Function of Law 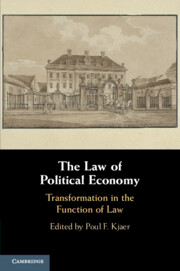 ‘What emerges from the contributions is that political economy not only involves the economy in its narrow sense and the institutional political field but also extends to our view of the social and ecological worlds and the central role played by law in these contexts.’

‘By exploring some of the regulatory challenges of the globalizing economy from interdisciplinary, albeit mainly European perspectives, the [book] can inspire American and European academics and practitioners in elaborating common responses to the regulatory challenges of authoritarian power politics and multilevel governance of global public goods in the rapidly changing context of climate change, global health pandemics, and obvious governance failures.’

‘… this collection provides a valuable foundation for understanding law and political economy.’

‘Although scholars on both left and right often view law as only an epiphenomenon of political economy, this dynamic and multifaceted collection of essays persuasively suggests the opposite: law and political economy mutually constitute each other. Law therefore inevitably reflects, reinforces, restrains, reproduces and resists the driving forces of political economy. Illuminating and consistently provocative, The Law of Political Economy is a groundbreaking volume that complicates our understanding of both law and economics amidst the political turmoil and transformation of the early twenty-first century.'

‘A brilliant collection including contributions from leading international scholars that together offer extended critical engagement with key concepts: governance, democratic participation, legality, rights. It is bound to become an important point of reference in ongoing debates on both sides of the Atlantic concerning law and political economy in the twenty-first century.'