Home
The Intellectual World of the Italian Renaissance

The Intellectual World of the Italian Renaissance

Language, Philosophy, and the Search for Meaning 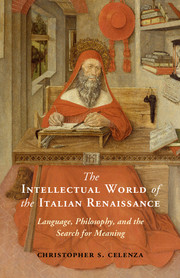 In this book, Christopher Celenza provides an intellectual history of the Italian Renaissance during the long fifteenth century, from c.1350–1525. His book fills a bibliographic gap between Petrarch and Machiavelli and offers clear case studies of contemporary luminaries, including Leonardo Bruni, Poggio Bracciolini, Lorenzo Valla, Marsilio Ficino, Angelo Poliziano, and Pietro Bembo. Integrating sources in Italian and Latin, Celenza focuses on the linked issues of language and philosophy. He also examines the conditions in which Renaissance intellectuals operated in an era before the invention of printing, analyzing reading strategies and showing how texts were consulted, and how new ideas were generated as a result of conversations, both oral and epistolary. The result is a volume that offers a new view on both the history of philosophy and Italian Renaissance intellectual life. It will serve as a key resource for students and scholars of early modern Italian humanism and culture.

'In The Intellectual World of the Italian Renaissance, Christopher Celenza provides a priceless vademecum for the study of Italian humanism. It rolls up in a delectable ball all that has come before: Garin and Kristeller; Burckhardt, Baron, and Martines; Fubini and Vasoli; Hankins, Allen, and the others. It presents in depth and with exquisite clarity the major works of nine leading humanists from Petrarch to Poliziano (plus many others introduced in discursive 'parentheses'), culminating with the writer and critic Pietro Bembo, who translates the humanist heritage into a new language of art, a Latinized Tuscan. The lucidity of the explication de textes is matched by the precision with which Celenza profiles his cast of characters, who are presented with full dimensionality in their psychological, social, and cultural contexts: the careerist Poggio, the brawler Valla, the self-made man and Medici servitor Poliziano.'

'This is an immensely learned book, written in a clear, accessible style and rich in insight and understanding. Celenza has followed the currents of language and philosophy - which he defines, as do his sources, as the love of wisdom rather than a defined discipline - as elements in the search for meaning and hence self-knowledge and shared values. It is the ideal place to begin a journey into the ideas and debates that informed the intellectual world of the Italian Renaissance.'

'The Intellectual World of the Italian Renaissance offers an accessible synthesis of intellectual history in Italy from Petrarch to Pietro Bembo … This book will become the standard introductory text to the subject for students, while specialists will also find here a well-written and thoughtful account of a topic that so often defies synthetic treatment … Historians and students of thought, culture and society, as well as literary scholars and students will all find much to ponder here.'

'This is an immensely learned book, written in a clear, accessible style and rich in insight and understanding.'

'This is a rich and engaging study. Not a history of Renaissance philosophy as such, it is, rather, an examination of the intellectual worlds of the fifteenth century and in particular of the dominant role of Latin.'