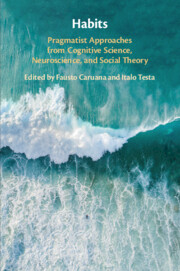 'This informative and ground-breaking anthology is an invaluable resource for anyone trying to reimagine the foundations of the mind. Exploring the concept of habit through the lens of pragmatism, the book maps out pragmatist positions and how such positions can extend, embed, enact, and embody current debates in the cognitive and social sciences.'

'This volume offers a fascinating, interdisciplinary approach to understanding important questions about habits. With an emphasis on dissolving the dualism between the automatic actions of the body and the deliberate movements of the mind, it leaves one wondering whether the twilight of philosophy of the mind, as it is traditionally practiced, is approaching.'

'The authors give us what we need: a place to begin. This landmark book takes a much-needed jump in the right direction by placing habit in the center of our field. I don’t think you can study habit without using the original contributions assembled here.'

'A great book in which philosophers, psychologists and neuroscientists explore how habits arise and shape many critical features of our social and cultural life.'

'Philosophers and neuroscientists have long treated habitual actions as reason’s shadow, as rigid mechanical routines. This stunning collection of essays excavates a rich counter-history of the neurophilosophy of habits. The contributors combine rigorous original scholarship with ambitious updates of the great pragmatist philosophers’ subtle views on embodied cognition and human plasticity.'