Home
Free Will and the Rebel Angels in Medieval Philosophy

Free Will and the Rebel Angels in Medieval Philosophy 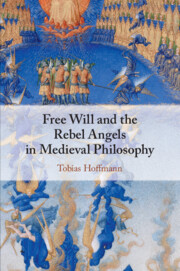 In this book Tobias Hoffmann studies the medieval free will debate during its liveliest period, from the 1220s to the 1320s, and clarifies its background in Aristotle, Augustine, and earlier medieval thinkers. Among the wide range of authors he examines are not only well-known thinkers such as Thomas Aquinas, Duns Scotus, and William of Ockham, but also a number of authors who were just as important in their time and deserve to be rediscovered today. To shed further light on their theories of free will, Hoffmann also explores their competing philosophical explanations of the fall of the angels, that is, the hypothesis of an evil choice made by rational beings under optimal psychological conditions. As he shows, this test case imposed limits on tracing free choices to cognition. His book provides a comprehensive account of a debate that was central to medieval philosophy and continues to occupy philosophers today.

‘This book provides an historically sound and philosophically sophisticated overview not only of medieval debates concerning the angelic freedom to sin, but also of the relevant discussions about human freedom. It should be read by anyone who is interested in the conditions under which wrongdoing might be possible.'

‘This is a work of notable scholarship and yet, unlike most such works, eminently readable. I have not enjoyed a philosophical book so much for a long time.’

'The book excels in many categories, most obviously in its patient, lucid, methodical presentation of often frustratingly complex ideas. I would like to focus on a feature of the work that readers may overlook: It tells a story about the development of ideas about free will, control, and autonomy that serves as a model for outstanding philosophical pedagogy for anyone who needs to teach or write on 'multigenerational' history of philosophy. For most of the book, Hoffmann 'vanishes', bringing each medieval philosopher to center stage. The book thereby avoids devolving into mere summary or into anachronistic discussions that showcase contemporary concerns over and above those of the philosophers under discussion.'

‘He [Hoffman] has set a very high standard for a differentiated treatment of the intriguing issues of intellectualism versus voluntarism, ignorance and evildoing, freedom and necessity in late medieval debates – a standard future studies on these topics are well advised to adhere to.'

‘This text will be essential for anyone interested in western medieval philosophy. From the clear definition and contextualization of key terms and figures to the breadth of philosophers discussed, it provides the reader with the necessary tools to thoroughly engage in some of the most contentious philosophical debates of the Scholastics.’

‘Hoffmann conducts a magisterial scholarly performance, examining in clear, cogent detail contributions by scores of medieval figures, some obscure, some famously sainted, who grapple with this most fundamental of human questions. Hoffmann’s prose and voice, passim, could not be more humane and attentive to readers’ needs, in a virtuoso display of critical analysis, while tackling one of the most complicated issues in medieval philosophic history. As you read, you’ll find yourself gazing up into the empyrean after every few pages contemplating the human will and the entire structure of the psyche, and how all human action is informed either by desire or by reason or by a battle between the two. The magisterial book has copious footnotes and concludes with a hearty bibliography, an index of manuscripts, and a dense general index. When I finished this book, I felt like I had lost a friend, or a hundred friends that I had been debating with. Provocative intellectual pleasures, not sinful ones, abound on every well-wrought page.’

‘Hoffmann collects with exemplary diligence the relevant texts, offering expert information about chronology as he goes, and providing comprehensive references to the large and multilingual secondary literature. No one should think of starting their research on this subject anywhere but here. Chapter by chapter, [he] provides the best narrative of these issues that’s currently available, going back as needed to discuss figures like Augustine, Anselm, and Bernard of Clairvaux, but focusing on the period from Bonaventure and Aquinas to Peter Auriol and William of Ockham. There’s no disputing the broad contours of his story: that the debate over free will takes on a special richness beginning in the mid-thirteenth century, and that discussions of the origin of sin shed a particular light on essential aspects of the debate. On every page, there’s much to be learned from the fine-grained details of his narrative, and when Hoffmann turns to synthesis, as on page 93, he does it with crystalline clarity.’

‘His study is innovative in at least three respects. First, it sheds new light on well-known theories. Second, Hoffmann’s study is also innovative because it includes a number of rather unknown authors who are often neglected in textbooks and standard histories of medieval philosophy. In fact, he shows that it is in these ‘minor authors’ that one finds some of the most remarkable contributions to the debate. Third, Hoffmann’s study is remarkable because it does not simply present a series of medieval theories. It goes beyond a mere historical reconstruction by pointing out a deep problem that is already mentioned at the beginning of the book and stated again at the end: ‘Despite important differences, all thinkers converge on the idea that a perverse choice lacks an ultimate explanation’. Hoffmann’s rich and detailed book is to be recommended to anyone interested in this fundamental problem.’

Dominik Perler Source: Journal of the History of Philosophy

'Exceptionally well written and thoroughly engaging, this is an excellent resource for those interested in free will, moral agency, and/or Christian philosophy.'