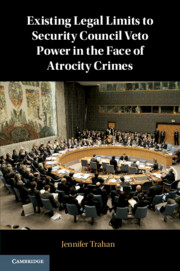 In this book, the author outlines three independent bases for the existence of legal limits to the veto by UN Security Council permanent members while atrocity crimes are occurring. The provisions of the UN Charter creating the veto cannot override the UN's 'Purposes and Principles', nor jus cogens (peremptory norms of international law). There are also positive obligations imposed by the Geneva and Genocide Conventions in situations of war crimes and genocide - conventions to which all permanent members are parties. The author demonstrates how vetoes and veto threats have blocked the Security Council from pursuing measures that could have prevented or alleviated atrocity crimes (genocide, crimes against humanity, war crimes) in places such as Myanmar, Darfur, Syria, and elsewhere. As the practice continues despite regular condemnation by other UN member states and repeated voluntary veto restraint initiatives, the book explores how the legality of this practice could be challenged.

‘In this bold book, Professor Jennifer Trahan presents a new, major thesis – that when permanent members of the UN Security Council threaten or use their veto power to block measures aimed at preventing or punishing genocide, war crimes or crimes against humanity, they may be acting contrary to international law. She persuasively argues that the use or threat of the veto in such situations can contravene fundamental norms of international law, key international conventions and the 'Purposes and Principles' of the United Nations Charter, and suggests ways to challenge the current state of affairs.'

‘As High Commissioner for Human Rights, I had the opportunity to address the UN Security Council many times and raised my concerns over the use of the veto to block action when factual evidence of egregious human rights violations was presented to the Council. This book provides an invaluable, authoritative analysis of the legality of the use of the veto in situations of ongoing genocide, crimes against humanity, and war crimes, measured against legal obligations emanating from jus cogens, the UN Charter, and foundational treaties.'

‘This bold and courageous book is on the right side of history.'

Mark A. Drumbl - Class of 1975 Alumni Professor of Law, Washington and Lee University

'I think the analysis that Professor Trahan has made is so important, and it is crucial that this is now discussed in the United Nations. When you look at the manner in which the Security Council has fulfilled its obligations over many years you really understand that there has to be a change and the solution might well be in this book. I find Professor Trahan’s arguments very convincing.'

'This is a terrific book that Professor Trahan has written. It is a fine piece of scholarship with very persuasive legal arguments.'

'This comprehensive book will be of interest to scholars, diplomats and anyone frustrated by the current failure of the United Nations Security Council to work towards deterring atrocity crimes.'

‘… deals with a topic of exceptional importance-how to break the deadlock [of the] U.N. Security Council and its consequent and chronic toleration for international aggression and human rights violations. Its solution to the seemingly hopeless problem is at once original, creative, and credible. Her reasoning is sound and based on reliable and complete evidence. Her research into both the law and relevant scholarship is thorough. The structure of the book’s argument is tightly focused on proving its thesis. And her language is lucid without sacrificing lawyerly precision.’