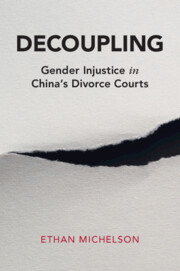 Michelson's analysis of almost 150,000 divorce trials reveals routine and egregious violations of China's own laws upholding the freedom of divorce, gender equality, and the protection of women's physical security. Using 'big data' computational techniques to scrutinize cases covering 2009–2016 from all 252 basic-level courts in two Chinese provinces, Henan and Zhejiang, Michelson reveals that women have borne the brunt of a dramatic intensification since the mid-2000s of a decades-long practice of denying divorce requests. This book takes the reader upstream to the institutional sources of China's clampdown on divorce and downstream to its devastating and highly gendered human toll, showing how judges in an overburdened court system clear their oppressive dockets at the expense of women's lawful rights and interests. This book is a must-read for anyone interested in Chinese courts, judicial decision-making, family law, gender violence, and the limits and possibilities of the globalization of law.This title is also available as Open Access on Cambridge Core.

'Decoupling is stunning – both as an academic tour-de-force and for its searing account of how poorly women fare in divorce litigation in China. Drawing on some 150,000 cases, Ethan Michelson not only brilliantly demonstrates the deep institutional roots of that experience, but also uses it to raise profound questions with which any scholar doing comparative law of any type will need to grapple.'

'Based on meticulous research, Michelson shows how courts in China often deny divorce petitions brought by wives claiming domestic abuse. Penetrating the veneer of China’s adherence to global norms of gender equality, the book probes the causes and devastating consequences of such routine denials. The result is a gripping account of the deep gender inequalities perpetuated by the judicial system in China. Michelson digs deep into the sociologists’ methodological toolkit to substantiate his claims.'

'Through his innovative use of a computational approach to analyzing voluminous online written divorce decisions, Professor Michelson has convincingly pinpointed the sources of institutional failures of the Chinese civil justice system to uphold women’s rights and to protect them from marital abuse despite its legal promises. Complemented by qualitative examples, the mixed-method analysis is meticulous, powerful, and eye-opening. It is maddening to learn that domestic violence or abuse by a husband does NOT improve a woman’s chance of getting a divorce in court, NOR does it increase her chance of being granted child custody.'

'Combining big data analysis of hundreds of thousands of Chinese court decisions with deep knowledge of Chinese society, Ethan Michelson probes the gap between black letter law and courtroom practice to expose the pain and injustice of judge centered divorce proceedings and to highlight a more universal pattern whereby coping mechanisms of lower level bureaucrats systemically undermine policies to advance equality before the law. A rare and successful account that simultaneously explains how Chinese courts work and why women usually get worse outcomes than men as plaintiffs and defendants.'

'This book offers an illuminating account of family law in China and shows that women have borne high costs from a clampdown on adjudicated divorce. The book carefully traces implications of adjudicated divorce practices for women's rights, family violence, and child custody. This fascinating book should be essential reading for those interested in family studies, gender inequality, domestic violence, or children's rights and welfare in China.'

'Michelson’s book reveals the quotidian reality of divorce in China. Divorce is supposed to be straightforward but it is decidedly not. Driven by a complicated set of informal incentives, Chinese judges routinely refuse to grant initial petitions for divorce, thereby victimizing women, especially victims of domestic violence. The book is essential reading for anyone interested in comparative law.'

'Ethan Michelson provides the reader with an impressive deep dive into the challenges faced by Chinese women seeking a divorce from an unwilling husband, focusing particularly on cases with an allegation of domestic violence. Michelson skillfully combines narrative with statistical analyses to paint a troubling picture of what Chinese woman face in seeking a contested divorce. This book will be important reading for scholars of courts, gender, and Chinese society and culture.'

'Mining a treasure trove of court decisions available in the public domain, Michelson takes readers on a fascinating, revealing and piercing journey through China’s divorce court system. Weaving together massive big data analyses with heart wrenching stories of domestic abuse, clogged divorce courts, judges’ career concerns and patriarchal ideology, this book offers a powerful critique of the contradiction between the rhetoric and reality of women’s equal rights in China.'

'In this masterful blend of narrative case analysis and computational social science, Ethan Michelson analyzes over one hundred thousand divorce cases posted on regional court websites, providing a compelling explanation for pervasive judicial behavior that ignores black letter law, disadvantaging female plaintiffs in ways that blatantly discount even the most egregious cases of domestic violence. The substantive findings and methodology will be of broad interest in the sociology of law, gender studies, and the interdisciplinary study of contemporary China.'

'Digging deeply into “big divorce data” in China, Ethan Michelson shows that Chinese women remain severely disadvantaged in a society that claims to have created gender equality. I recommend this book to anyone who is interested in gender, family, and law in China.'

'Decoupling is an ambitious and fascinating study that illuminates the discrepancy between China’s official promotion of gender equality and the reality faced by many women. Michelson superbly demonstrates how institutional forces and patriarchy together undermine China’s marriage laws and result in systematic injustice against women in divorce courts and violence in their homes. This rich and gripping book is relevant to all gender and family scholars.'