How Race and Class Shape Winning and Losing in American Politics 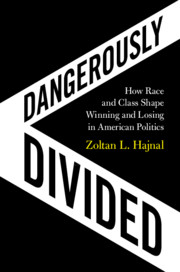 As America has become more racially diverse and economic inequality has increased, American politics has also become more clearly divided by race and less clearly divided by class. In this landmark book, Zoltan L. Hajnal draws on sweeping data to assess the political impact of the two most significant demographic trends of last fifty years. Examining federal and local elections over many decades, as well as policy, Hajnal shows that race more than class or any other demographic factor shapes not only how Americans vote but also who wins and who loses when the votes are counted and policies are enacted. America has become a racial democracy, with non-Whites and especially African Americans regularly on the losing side. A close look at trends over time shows that these divisions are worsening, yet also reveals that electing Democrats to office can make democracy more even and ultimately reduce inequality in well-being.

'This is an authoritative, systematic, and important book that will be an agenda setter for years to come. The arguments are powerful and frequently counter-intuitive.'

'Both within and beyond academe, most acknowledge the centrality of race to American politics. Somehow, however, most of the leading analysts of the American political scene fail to appreciate the ways in which race structures the outcomes of American democracy as well. They go on and on about class, while race (and racism) is relegated to the sidelines. In this much-needed and deft analysis, Hajnal corrects this ‘oversight’ and provides irrefutable evidence that race-based disparities tell us more about winners and losers in American democracy than do, say, middle-class versus working-class divisions. In these troubled times, Dangerously Divided is essential reading for those who are serious about working toward a more perfect union.'

'Dangerously Divided is a powerful and convincing account of the fundamental role that race plays in American politics. At all levels of government, across varied institutional settings, and over time, Hajnal demonstrates that divisions by race eclipse other potential cleavages. Consequently, whites tend to win in elections and in policy making, while people of color lose.'

'Using a novel research design, Zoltan L. Hajnal convincingly demonstrates that race has replaced class as the main dividing line in American politics, and that immigration has become a major contributor to this divide - triggering a backlash that has increased white defections from the Democratic Party. Hajnal’s insights on the political impact of the nation’s changing demographics, including whether the current anti-immigrant strategy will eventually backfire, make Dangerously Divided a must-read.'

'A deep dive into … how racial division fuels our politics and shapes our day-to-day lives … [Hajnal] expresses himself so simply and clearly in the body of the book that even a journalist can understand him.'

‘The book convincingly demonstrates that race, far more than class, is key to predicting who wins and loses in American politics.’