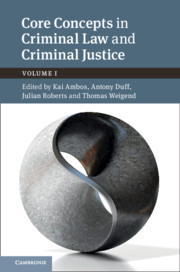 Attempts at trans-jurisdictional debate and agreement are often beset by mutual misunderstanding. Professionals and academics engaged in comparative criminal law sometimes use the same terms with different meanings or different terms which mean the same thing. Although English is the new lingua franca in international and comparative criminal law, there are many ambiguities and uncertainties with regard to foundational criminal law and criminal justice concepts. However, there exists greater similarities among diverse systems of criminal law and justice than is commonly realised. This book explores the foundational principles and concepts that underpin the different domestic systems. It focuses on the Germanic and several principal Anglo-American jurisdictions, which are employed as examples of the wider common law-civil law divide.

‘Core Concepts in Criminal Law and Criminal Justice brings together leading scholars from Anglo-American and Germanic jurisdictions in the attempt to build a ‘common grammar' of criminal law and criminal justice. The insightful collection will be an invaluable point of reference for any researcher in the field.'

‘Core Concepts in Criminal Law and Criminal Justice is one of the most serious and promising attempts to build a trans-jurisdictional dialogue between Anglo-American and continental European criminal law scholars. Aimed at exploring the basis for a common grammar in Western criminal law, the book uncovers interesting commonalities and diversities between these legal traditions in their legal frameworks and criminal law theories. To sum up, a must-read book for those who really want to delve into comparative analysis of criminal law.'

‘If the existence of a global society is defined by the existence of common rules with hardly any local modulations, this book presents the reader with his birth certificate. In fact, the book describes how, in practice, the interpretation and application of common rules operates to face global problems in that part of 21st-century society that is still called the West, beyond the local regulations in which it is supposed to be the most parochial of all areas of law: criminal law. What is the common foundation of punishment for omissions? Who is responsible for crimes, why and to what extent? What is consent as a defence? What is terrorism and how is it punished? Is there a maximum limit to the penalty to be imposed for a crime? What penalty should be imposed on repeat offenders? How are penalties negotiated? What are the minimum rules of due process and what should be done about illicit evidence? All these questions have answers in this book in shared rules, with local modulations more or less important, but that do not cease to be that: hardly spaces in the common rules for local adaptation. In this way, its editors (Kai Ambos, Antony Duff, Julian Roberts and Thomas Weigend) demonstrate that, beyond Brexit and high-flown statements, there will continue to exist a society with shared rules on both sides of the English Channel.'

‘This is an ambitious opening foray in an exciting project, which is both comparative and conceptual. Rather than simply comparing legal practices, each chapter uses comparative inquiry to excavate underlying theoretical and philosophical assumptions and perspectives. This project offers new ideas and new frameworks that can enliven thinking within different communities of criminal law theory.'