Seeing Red in Body- and God-Talk 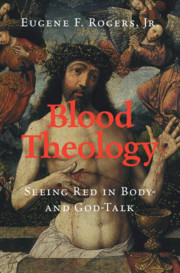 The unsettling language of blood has been invoked throughout the history of Christianity. But until now there has been no truly sustained treatment of how Christians use blood to think with. Eugene F. Rogers Jr. discusses in his much-anticipated new book the sheer, surprising strangeness of Christian blood-talk, exploring the many and varied ways in which it offers a language where Christians cooperate, sacrifice, grow and disagree. He asks too how it is that blood-talk dominates when other explanations would do, and how blood seeps into places where it seems hardly to belong. Reaching beyond academic disputes, to consider how religious debates fuel civil ones, he shows that it is not only theologians or clergy who engage in blood-talk, but also lawmakers, judges, generals, doctors and voters at large. Religious arguments have significant societal consequences, Rogers contends; and for that reason secular citizens must do their best to understand them.

‘This book offers an exhilarating reflection on what it is to think about, with and for the sake of blood; and to so think – as it has long been thought – within the Christian tradition, but not only the Christian. Eugene Rogers' theological reflections are at all times in fruitful dialogue with those of other faiths and of other disciplines, most notably Judaism and anthropology, from which he learns and deepens his thinking. Rogers does not present a systematic reflection on blood. Rather he repeats blood's contradictions through a series of fragments: chapters that address various sites of blood's use, its spilling into social thought, into different cultural domains. Rewarding its readers with ever-deepening insight, the book is a singular and powerful work of theology that will enthral and provoke.'

‘This book is sure to be both popular and important. The author is a distinguished theologian and philosopher. The topic is both fundamental to, yet neglected by, Christian theology: although ‘blood' studies are big elsewhere in the academy, such as in anthropology and sociology. There is no other extended study of the Christian symbolics of blood – or certainly not by someone who brings together at a high level theology (Patristic, medieval and modern), social theory, post-modern philosophy and biblical studies. ‘Blood' (real and symbolic) is something which, as the author points out, seeps into almost all historical theological topics: death, sacrifice, Eucharist, childbirth and creation. It is also to the fore in many contemporary concerns of the churches: debates over killing animals and eating meat, torture and – controversially – same-sex relations, racism and (somewhat unexpectedly) creationism. A good book on the Christian symbolics of blood will be important to historians, social theorists, social scientists and the like, as well as to theologians and, indeed, church authorities as they struggle with some of the issues above. In sum, this is an original and important book by one of this generation's most innovative theologians.'

‘A singular and powerful work of theology that will enthral and provoke.'

‘An original and important book by one of this generation's most innovative theologians.'