Confronting the Past, Decolonizing the Future in Greece and Israel 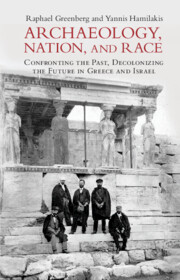 Archaeology, Nation, and Race is a must-read book for students of archaeology and adjacent fields. It demonstrates how archaeology and concepts of antiquity have shaped, and have been shaped by colonialism, race, and nationalism. Structured as a lucid and lively dialogue between two leading scholars, the volume compares modern Greece and modern Israel – two prototypical and influential cases – where archaeology sits at the very heart of the modern national imagination. Exchanging views on the foundational myths, moral economies, and racial prejudices in the field of archaeology and beyond, Hamilakis and Greenberg explore topics such as the colonial origins of national archaeologies, the crypto-colonization of the countries and their archaeologies, the role of archaeology as a process of purification, and the racialization and 'whitening' of Greece and Israel and their archaeological and material heritage. They conclude with a call for decolonization and the need to forge alliances with subjugated communities and new political movements.

‘This is one of the most interesting and thought-provoking archaeology books that I have read in a long time. It is truly a meeting of two deep-thinking minds – Yannis Hamilakis musing on Greece and Rafael Greenberg musing on Israel. Universally regarded as two of the most thoughtful, intellectual, and politically active archaeologists working today, both with impeccable credentials, one couldn’t ask for two more devoted and opinionated (in a good way) scholars, who don’t fear to speak their minds and advocate for the causes that they hold dear.’

‘We get to eavesdrop on two accomplished archeologists as they discuss the high stakes of the interplay of nationalism with notions of antiquity. This comparison of the Israeli and Greek instances is ultimately about the meaning of archeology itself, as a discipline that is no less concerned with the present than it is with the past.’

‘National archeology stands out as a field in which politics is both uniquely dominant and entirely suppressed. Two top experts offer a frank discussion of archeology’s role in the history of nationalism in their respective countries and of its costs. They uncover the various manners in which archeology functions as both a means and an end in struggles of liberation and conquest, which are often driven by spatial imagination and fantasies no less than by material aspirations. A must-read for anyone interested in archeology, in ancient and modern Israel and Greece, and in critical thinking about nationalism. This is a uniquely original contribution to the ever-urgent question: who owns the past.’

‘These two scholars provide fascinating insight into how and why archaeology has been a critical tool in building two very different nations - Greece and Israel. Using conversation rather than dry exposition, Greenberg and Hamilakis also show that science, no matter how entangled with religion and nationalism, can upset our narrow ideas about history. An essential book for anyone curious about the way we create our past to control the present-and future.’

Andrew Lawler - author of Under Jerusalem: The Buried History of the World’s Most Contested City

‘Archaeology, Nation and Race is a serious pleasure-a smart, wide-ranging, and spirited conversation, not just between two highly knowledgeable and thoughtful interlocutors, but between the Hellenic and Hebraic, local and global, seen and unseen, dead and living. Greenberg and Hamilakis each come steeped in the particulars of the national archaeologies to which they’ve devoted their lives; both are also deeply open, and committed to challenging themselves and the cultural and political assumptions that surround them. This book has a refreshing urgency about it.’

Adina Hoffman - Yale University, author of Till We Have Built Jerusalem: Architects of a New City

‘Archaeology, Nation, and Race explores the political dimensions of archeology through a historical and sociological-anthropological analysis. It is structured as a vivid dialogue between two scholars that explores the ways in which archaeology was employed by both Hellenic and Zionist nationalism. Even more radically, this book explores how archaeology has been shaped by crypto-colonization, colonialism and race. Greenberg and Hamilakis have written a transformative account of utmost importance that should be read by every archaeologist.’

‘Two leading scholars have a fascinating conversation comparing the contribution of archaeology to the mythical constitution, racialization, and crypto-colonialism of Israel and Greece. Shedding new light on the Eurocentric models of Hebraism and Hellenism, they conduct a masterful critique of purification and idealization, and invite us to envision a decolonizing scholarship that forges activist alliances.’

It may seem paradoxical that it should be archaeologists who unravel the ideological underpinnings of global modernity, but Greenberg and Hamilakis are uniquely qualified to perform this long-overdue task of conceptual excavation. Taking the twin cases of Greek and Israeli nationalism – and emphasizing their sometimes unexpected and even shocking commonalities – they deploy a disarmingly dialogical format to expose the intersections of race, antiquity, territoriality, and cultural hegemony in a formulation that the world has, for far too long, largely taken as the natural order of things.’

‘Through parallel texts combined in a dialogue, a format rarely encountered in the published work of scholarly literature, this book brings together two archaeologists, one from Greece, the other from Israel, who confront the history and ethics of their discipline. They address how the Western world has seen itself reflected through the dual heritage of classical Greece and of the Holy Land, the backbone of the religions of the Bible. This ideological outlook about origins has weighed heavily on the archaeology of Greece and that of Palestine. As a result, the archaeological record has been used to sustain a nationalistic narrative that gives little importance to rational inquiry. This book calls for a critical distance that questions the place of arché - antiquity and its authority - as the foundation of archaeology. In so doing, it opens a debate, as urgent as it is necessary, that reminds us about the relevance of Volney’s long forgotten 1791 pamphlet, Les ruines (The Ruins), with its polemic against the colonization of the Past.’