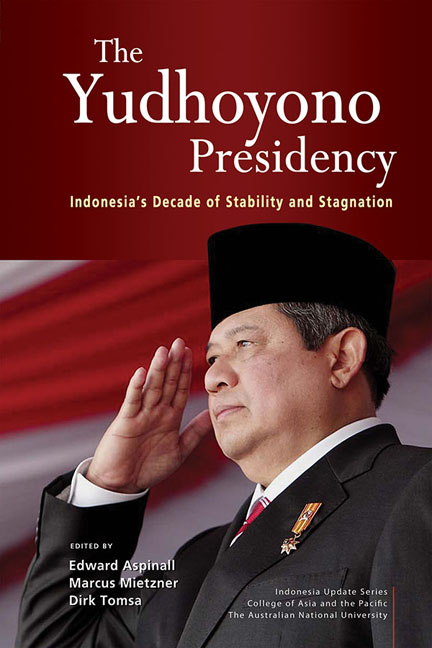 As an insider in both the Habibie and Yudhoyono–Boediono administrations, and an academic who does not shy away from expressing candid opinions, I have been asked to evaluate the performance of the Yudhoyono government from both an internal and a comparative perspective. It is indeed difficult to get a clear picture of what is happening in Indonesia if one simply relies on media reports. Reading news or commentaries in Indonesian newspapers, or watching talk shows on Indonesian television, would give one the impression that the country is a basket case. Indonesia is at times portrayed as a failed state, or one that is very close to failing, with a huge number of people still living in poverty, crumbling infrastructure, widespread social conflict and a high level of corruption. Moreover, many Indonesians are critical of the government's perceived weakness vis-à-vis the outside world. Listening to the rhetoric during the 2014 presidential race between Joko Widodo and Prabowo Subianto, one would be left with the impression that Indonesia is a weak state, powerless in the face of external machinations bent on controlling the country's natural resources; an object rather than a subject in international relations; and a country lacking the wherewithal to stand up for itself and, by implication, be counted in an increasingly competitive and uncertain global era.

In contrast, reporting in the foreign media has mostly been complimentary towards Indonesia in recent years. Differing sharply from the negative image projected onto the world stage in the immediate post-Suharto years, Indonesia is now generally seen as a success story. The country's success in peacefully managing its democratic transition has received international plaudits, particularly when so many other countries have failed dismally. Indonesia's economic recovery, its status as a newly emerging economy and its constructive role in the Southeast Asian region have drawn praise. Far from being regarded as a failed or failing state, Indonesia is regarded as a model for countries embarking on a democratic transition, whether in the predominantly Muslim countries in the Middle East and North Africa or within Southeast Asia.

Obviously, official speeches by Indonesian government officials have emphasised this favourable narrative while glossing over Indonesia's many remaining shortcomings. As is so often the case, however, the truth lies somewhere in between. Indonesia is neither a failed state nor an unmitigated success story.