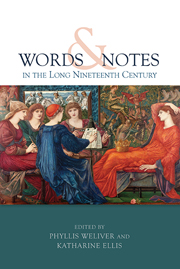 Words and Notes in the Long Nineteenth Century

Introduction: Approaches to Word–Music Studies of the Long Nineteenth Century

IN Charles Dickens's Great Expectations (1860–61), the narrator tells us in the first paragraph that Philip Pirrip's baby lips ran together the sounds of his given and last names into Pip: ‘So, I called myself Pip, and came to be called Pip.’ The onomatopoeia of the name aptly characterizes his sense of self as a small, piping presence in a large, often hostile world. As a young adult, however, Pip receives a name decidedly more advanced in acoustic associations as well as sounding more grown up. ‘We are so harmonious, and you have been a blacksmith – would you mind it?’ asks Herbert Pocket of his new friend. ‘Would you mind Handel for a familiar name? There's a charming piece of music by Handel, called the Harmonious Blacksmith.’ Pip agrees: ‘I should like it very much’ (202).

To the first readers of Great Expectations, the Hanoverian composer would have been strikingly present due to the centennial commemoration of his death the year before the novel's publication, which included the first of the Great Handel Festivals. The composer's popularity was, of course, well established throughout England before 1859; his music was widely performed and his name was synonymous with nobility and Christian virtue. With the establishment of a festival of his music at the Crystal Palace, a great showpiece of British progress, Handel became decisively associated with that Victorian watchword ‘progress’. Moreover, the thousands of men and women who gathered triennially to sing together the great oratorios at the London festival were drawn from around the country, but generally originated in the industrial north and the Midlands.