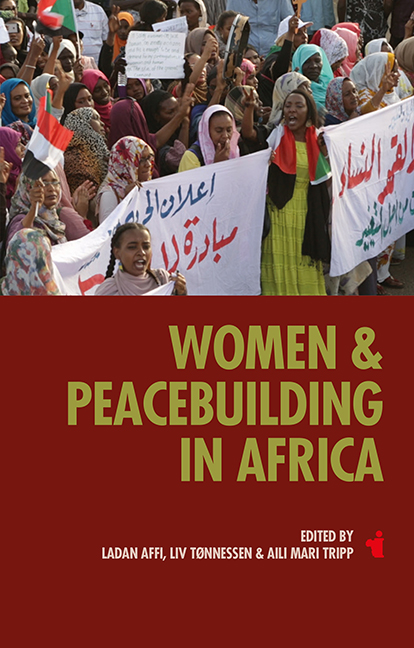 Women and Peacebuilding in Africa

5 - Sudanese Women’s Demands for Freedom, Peace, and Justice in the 2019 Revolution

The world-admired Sudanese revolution is marked by unprecedented contribution and participation of women throughout the country, including women from all walks of lives. The participation of women is not a by-chance event, as Sudanese women own a strong history of resistance in the face of dictatorships and patriarchy. Women were very active resisting the hegemony of the previous regime and its laws and practices.

The popular uprising against the Islamist-military regime of Omar al Bashir lasted for eight months beginning in December 2018 and women were at the forefront of the peaceful protests. Across many areas, women constituted the majority of the protesters (Al-Nagar and Tønnessen 2019). Women from diverse backgrounds in terms of class, generation, religion, education, and ethnicity occupied the streets of Sudan, facing risk of arrest, torture, sexual assault, tear gas, and live bullets. After the ousting of Omar al Bashir on 11 April 2019, a transitional military council (TMC) consisting of al Bashir's former allies took control of the state. At this moment during the protests, women formed a sit-in outside the military headquarters – especially young women. Even after the ‘Khartoum massacre’ on 3 June 2019, when the military violently slaughtered participants and reportedly sexually abused protesters, women went back to the streets, refusing to back down (Al-Nagar and Tønnessen 2019). Negotiations between the TMC and the Forces for Freedom and Change (FFC) in August facilitated a new constitutional declaration and the formation of the Sovereign Council (consisting of members of both the FFC and the TMC) as the collective head of state of Sudan for a three-year period and a transitional government consisting of technocrats under the leadership of Prime Minister Abdallah Hamdok.

This chapter aims to understand why women were so visibly involved in the most recent revolution and how it relates to their struggles for peace, justice, and freedom during the dictatorship of al Bashir. Women's activism against discrimination and inequality that hamper their ability to live free of violence and contribute to society as full citizens has a long trajectory. Drawing on recent scholarship on women and the Arab Spring (Moghadam 2018; see also Singerman 2013; Khalil 2014; Al-Ali 2012; Sadiqi 2016), we argue that women's legal and social status before the Sudanese revolution shaped women protesters’ demands.