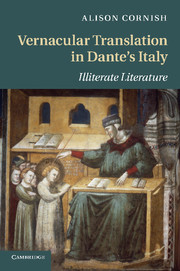 In the year 1355, an industrious and successful merchant, landowner and prominent citizen of Siena comes home for lunch. A busy man, finding lunch not ready, he reprimands his wife and maid. To quiet her husband, monna Biagia gives him a book to read containing ‘a few lives of holy women’, which Giovanni, scandalized, hurls into the middle of the room. Wife tells husband he troubles himself too much over his possessions, despite his prosperity (‘Tu hai roba troppa e spesa poca; perché ti dai tanti affanni?’) and husband tells wife that while she has only ‘legends’ to occupy her, he has to get back to the shop. He then picks up the book and sits down only to open it at the ‘pleasing story’ of Mary of Egypt, the converted prostitute, in whose ‘celestial melody’ he becomes so engrossed that when his wife calls him to table, he tells her to wait. On the evident model of Saint Augustine's fortuitous reading of St Paul under the fig tree (inspired by the memory of St Anthony's conversion upon hearing the Gospel), Giovanni Colombini is thereupon converted by a book to become founder of the ascetic lay order of the Jesuates in Siena.

This story has been examined as evidence of female reading in the fourteenth and fifteenth centuries. It is also a window on urban lay reading more generally, made possible by vernacular translation: in this case, the anonymous Tuscan version of Maria Egiziaca, included among the Vite dei Santi Padri translated by Domenico Cavalca, or his team, in the 1330s.