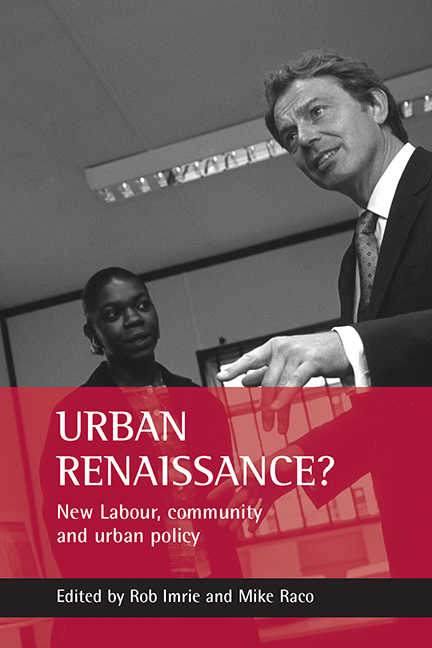 This book seeks to understand the nature of urban policy in the UK through the context of its main object and subject of regulation; that is, the community. Since the inception of the first formal urban policy in 1968, discourses of community have been pivotal to the development and implementation of a host of urban policy programmes. From the Community Development Projects of the early 1970s to the Challenge Fund Programmes of the late 1990s, the community has been the target and recipient of various forms of government intervention. Such intervention has tended to define target communities as part of geographically bounded areas, characterised by a deficiency of jobs, social skills, educational attainment, high incomes, and social mobility and opportunity. In turn, target communities have often been understood as comprising the socially excluded – or deviant and dysfunctional people – characterised by problems all of their own making. Urban policy programmes, in their various ways, have sought to integrate such people into the norms and values of mainstream liberal society, where the virtues of good parenting, stable family units and self-responsible citizens have been paramount.

The advent of New Labour to power has brought a renewed emphasis on the active involvement and development of communities as core to the successful regeneration of British cities. For New Labour, communities and the individuals that comprise them have been cast as part of the process of urban renaissance and core to the success of urban policy. As the Urban White Paper of 2000 states, communities “must be fully engaged in the process from the start and … everyone must be included” (p 32). Such engagement is envisaged as part of a new mode of governance, whereby communities are not only the recipients of policy but are active in policy programmes.

This book explores the meaning, and relevance, of New Labour's focus on community as the basis for urban renaissance. In doing so, its contributors interrogate the conceptual and ideological content of New Labour's conceptions of community, and evaluate how far, and with what effects, such conceptions are shaping contemporary urban policy and practice.