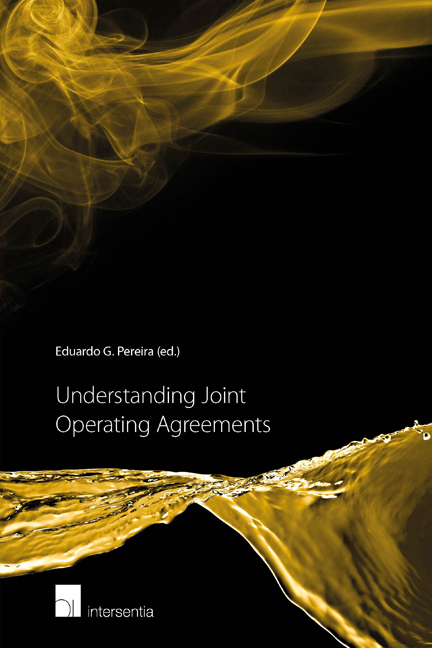 12 - Transfer of Interest and Change of Control in JOAs

A joint operating agreement (JOA) is a contract that regulates the relationship between parties who share the benefit of a right to explore and produce mineral resources which exist below the surface of land, which is oft en granted by way of a (state) licence. Each party to the JOA has an interest in ‘ the rights, interests, obligations, and liabilities ’ derived from the JO`A and the underlying contract (Participating Interest).

The Model International Joint Operating Agreement published by the Association of International Petroleum Negotiators (AIPN JOA) is widely used in the oil and gas industry and will be the bedrock of this chapter as it explores the treatment of transfer and change in control provisions in the 2012 version of the AIPN JOA, (2012 JOA) and how they have evolved from earlier versions of the AIPN JOA. Indeed, the new version has increased in complexity in relation to this issue.

A JOA governs what is anticipated to be a long-term relationship between the parties for the conduct of oil and gas exploration and production. It is accordingly possible that during the JOA ’ s lifetime, one or multiple parties to the agreement will want to transfer their Participating Interest in the underlying project to a third party. There could be a variety of commercial reasons for a party ’ s desire to move on, such as wanting to diversify its portfolio, looking to farm out all or part of an interest in order to be carried, a decision to move out of a given geographical area, or – as we have seen recently with BP – a need for cash to fund other liabilities. Moreover, the current oil price environment has seen a wave of exits by international oil companies, with fields no longer being commercially viable. Finally, because of the duration of oil and gas exploration projects, other ‘ transformational events ’ such as a change in operator or the insolvency of one of the JOA parties could also lead to a transfer. The parties to the JOA need to ensure that their agreement provides for such situations.