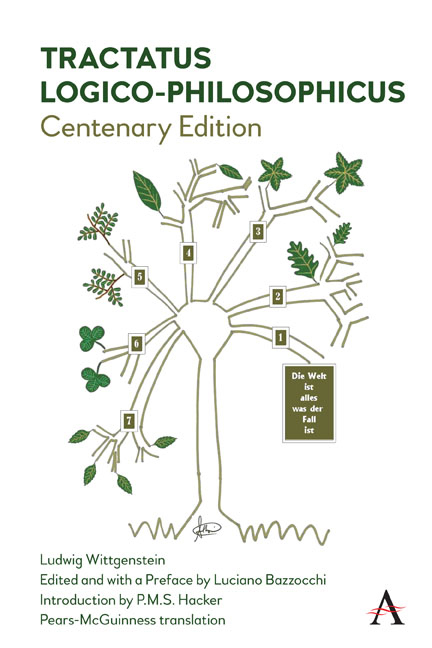 In Vienna, August 1918, Ludwig Wittgenstein dictated to a typist his Logisch-philosophische Abhandlung. Twelve other propositions were added by hand to attaching folios. In May 1919, from the Italian prison camp of Montecassino, Wittgenstein was able to send his manuscript to Russell. However, by August 1915, he had already written to Frege about his composing an ‘Abhandlung’. Later in October, Wittgenstein announced the same to Russell, albeit in a more elaborate missive. Until now, nobody has been able to explain how the rhapsodic and erratic entries of Wittgenstein's Notebooks could give rise to the majestic and perfect construction of the Tractatus. Not even the surprise discovery of a manuscript in 1965 – a collection comprising the entire contents of the final typescript of 1918 (missing only four propositions) – was able to change this impression, since it seemed even more mysterious than the original. The problem has been that it is quite impossible to understand Wittgenstein's method of composition if one regards the Tractatus as a sequential text, thereby imagining that it must have been composed more or less like any other book.

Now that we have gained a hierarchical perspective of its propositions, the view is much clearer. The notebook discovered in 1965 (Ms104 in von Wright's classification) cannot be a late copy of various previous versions, as was commonly thought. It is patently the real manuscript of the Tractatus, begun in 1915 and finished shortly before March 1918. Indeed, such complex, tree-like architecture cannot be assembled unless one works from the top-down. In fact, the manuscript that we have reveals – in its wording but moreover in its numbering – the very progression we expect.

As it happens, the first page of the manuscript contained precisely those cardinal propositions (1– 6) in the order that we can now read them on the first page of the present edition. Wittgenstein left space for the formula of proposition 6, because he did not, at the time, know how to give it expression. On page 2, Wittgenstein commented on the first four cardinal propositions (while remarks 5.1 and 5.2 were conceived only by page 10). He then copied onto page 3 the sentences of the previous two pages, albeit without yet any decimal numbering. Evidently, Wittgenstein had expected to construct a sequential text that would be obtained through alternation of a ‘commenting on’ phase and an ‘inserting into’ phase.