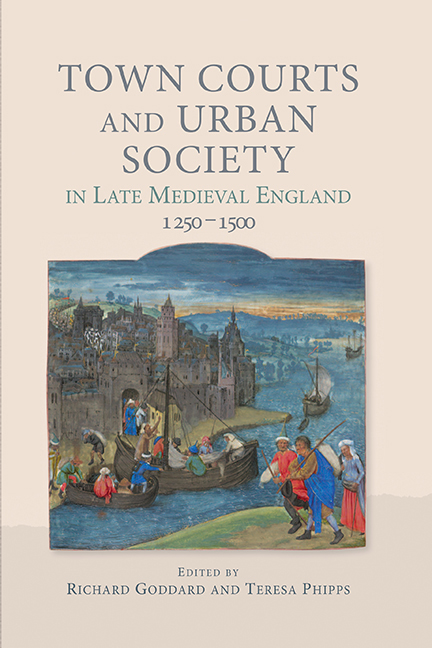 This chapter aims to provide a practical introduction to the jurisdictions, format, procedure and business of town courts, particularly for those seeking to employ this source to understand the economic, political and social life of medieval English towns. Scholars have paid more attention to manorial and common law courts than to town courts, and there have been few attempts to provide comparative studies that categorise their jurisdictions and business. This failure is due in large part to the tremendous variety of town courts and their reliance on local customary law, which have made them more a focus of specialists writing about a particular town. There is also no consensus – indeed, little sustained discussion at all – about how to define a town or ‘borough’ court, although the contributions to this volume should go some way towards addressing this lacuna.

The difficulty in defining a borough court rests in part on scholarly debates about the term ‘borough’, which has often been narrowly and legally construed by medievalists to mean a community recognised as a ‘free borough’ by the crown. This identification usually came in the form of a charter, although other signs – such as a parliamentary summons, taxation at the urban rate, or burgage tenure – are also considered evidence of borough status. Scholars continue to find it difficult to identify the specific characteristics that set boroughs apart from other communities, but most agree that the enjoyment of burgage tenure, whereby property could be freely bought, sold, leased and bequeathed, is considered the chief characteristic of borough status. Even so, there were recognised boroughs whose chief court was manorial, and communities with no substantive claim to borough status that had courts whose business and procedures resemble what happened in borough courts. Another problem is that ‘borough’ can be used as a synonym for ‘town’ – that is, a settlement in which most residents were engaged in non-agricultural occupations, even if the settlement lacked a borough charter and was no larger than most villages. This question of definition requires more systematic investigation, but in what follows, ‘borough courts’ (and ‘town courts’) denote legally-sanctioned meetings that included presentments of offences and/or personal pleas, and that were run under the authority (partial or complete) of officials acknowledged as representatives of an urban community.