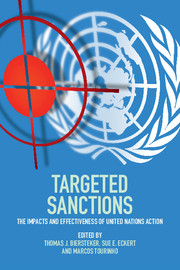 The use of targeted sanctions by the UN Security Council (UNSC) has gone through significant transformation over the past twenty-five years. Following the devastating humanitarian consequences of the comprehensive trade embargo imposed on Iraq in 1990, a substantial review of the design and implementation of sanctions took place. Albeit with some delay, as a response to that policy debacle, the UN Security Council decidedly shifted towards the imposition of targeted, not comprehensive sanctions. In only two instances (the former Yugoslavia in 1992 and Haiti in 1994), the Security Council imposed new comprehensive measures for a period (following targeted ones), but the last time a comprehensive trade embargo was imposed by the UN was in 1994. Today, most international and all UN sanctions are targeted sanctions.

Despite this transformation in the use of sanctions, much of the scholarly, policy, and public discussion on the issue remains unchanged. Discussions often fail to distinguish between targeted and comprehensive measures and continue to concentrate exclusively on whether sanctions are able to change the behaviour of targets. Rarely is consideration given to other ways in which sanctions may affect the target or, for example, how they could influence the international norms they are being used to enforce. Explanations of how sanctions should influence a target remain focused on the political outcomes (gain) resulting from economic sanctions (pain), with the implicit assumption that more pain will yield greater gain. The perception that sanctions tend to be ineffective is also widely held, particularly in contrast with expectations about the use of military force. Given the reliance of international actors on targeted sanctions, it is important that conceptual, analytical, and empirical knowledge of sanctions keeps pace with these developments.

In the broader context of international sanctions, UN sanctions play a particularly important role. Although unilateral and/or regional sanctions are often important, only those sanctions imposed by the UN Security Council under Chapter VII of the UN Charter are universally applied and legally binding. This is crucial, given that other countries and their commercial entities invariably diminish the impact of unilateral or regional restrictive measures. In addition, UN sanctions carry a legitimating power of their own.