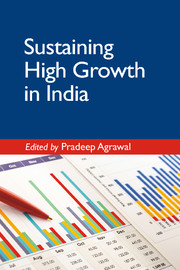 India was able to achieve a growth rate of over 8 per cent during 2000–2011, and even handled the global financial crisis of 2008–2009 with only a short lived one year dip in its growth rate. It seemed that India too could repeat the Chinese style economic miracle and modernize its economy to regain its ancient glory as a leading nation of the world. However, over 2011–2014, its economy witnessed significant deceleration, as reflected in the sharp fall in the growth rate – from 9 per cent in 2010 to the range of 5-6 per cent over 2013 and 2014 and many observers even began to write off India's high growth story. Given the importance of sustaining high growth rates in India, this book was conceptualized early in 2014 as a sequel to Reviving Growth in India (also edited by Pradeep Agrawal and published by Cambridge University Press, 2015). A workshop was organized at the Institute of Economic Growth, Delhi, India on 19 and 20 August 2014 which brought together leading economists from India, Europe and the United States to present their research findings about various aspects of sustaining high growth rates in India and to suggest policies to achieve it. The studies were subsequently subjected to careful deliberations and revisions. This book is a compilation of such selected studies.

For India, the importance of sustaining high growth rates for the next 25–30 years cannot be overemphasized. India will still be enjoying the fruits of demographic dividend for the next 25–30 years, and it will be a particularly opportune time to strongly focus on sustaining high growth, because we will have the benefit of the demographic support in the form of a young working age population. If we fail to achieve high growth, there will be serious consequences, in the form of high level of poverty and a large and young population looking for work and probably not finding enough of it, which can lead to social and political unrest and other problems. But, if we use this demographic dividend and good economic policies to achieve a growth rate of 8–9 per cent over the next 25–30 years, we can achieve per capita income over $12,000 (in purchasing power parity (PPP) terms this will be about $40,000, comparable to the current per capita income in Europe and the United States).