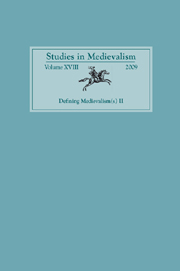 From the Middle Ages to the Internet Age: The Medieval Courtly Love Tradition in Jeanette Winterson's The Passion and The.Powerbook

The contemporary British novelist Jeanette Winterson (b. 1959) is well known for her fantastical autobiography of life among a zealous group of Pentecostal Evangelicals, her gender-bending fictional narratives, her spare but seductive prose style, and even her shameless selfpromotion. But she is less well known for the medievalism that has subtly and persistently shaped her works of fiction. A quick survey of the scholarship that has proliferated about Winterson in the last two decades reveals essay titles replete with permutations of the prefix “post”: post-humanist, post-realist, post-Enlightenment, and of course “postmodern.” What rarely merits mention are Winterson's premodern and, indeed, medieval affiliations. Recently, Jean-Michel Ganteau has come closest to focusing on this medieval strand in Winterson's fiction, but his criticism positions her work within the context of romance as a transhistorical mode ranging from Malory to Hawthorne and Woolf rather than to romance as a specifically medieval literary tradition. Yet Winterson's works of fiction are rich in allusions to and rehearsals of medieval romance in particular.

As an illustration of this debt to medieval literature, Winterson's first published fiction, the quasi-autobiographical novel Oranges Are Not the Only Fruit (1985), featured interpolated stories from the medieval Perceval legend. And most of her works of fiction published since 1985 have drawn more or less heavily on medieval textual traditions. Even her most recent novels illustrate that magnetic attraction to medieval material: the 2004 novel Lighthousekeeping, though set primarily in northwest Scotland in the nineteenth and twentieth centuries, includes a character named Tristan as well as brief reflections on Arthurian romance, and her 2005 novel Weight plays with Boethian ideas about freedom and destiny, albeit in a story about the classical Atlas myth.