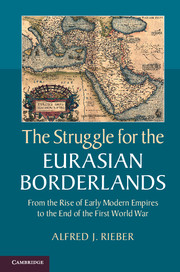 In their struggle for hegemony over the Eurasian borderlands, the rulers and ruling elites of the multicultural states – the Habsburg, Ottoman, Romanov, Safavid–Qajar, and Qing empires – sought to fashion an overarching ideology and a set of cultural practices aimed at binding together peoples of different ethnic, religious, and regional loyalties. In the twentieth century this search for a principle of authority became as persistent an imperative for the fascist and communist leaders of multinational states as it had been for the dynasts of the imperial period. In both cases, legitimacy was not easily established in the tumultuous process of state-building accompanied by the rapid expansion or contraction of frontiers, and the incorporation and loss of large populations in the borderlands.

In the imperial period the four ideological mainstays of imperial rule were: (1) a divinely inspired dynastic succession, although inconsistently followed; (2) a founding myth based in part on ancient chronicles and epic poetry, and in part on the invention of intellectuals in service of the state; (3) a set of cultural practices designed to glorify the ruler’s authority, project his power, and intimidate his subjects and foreign rivals; (4) a symbolic imagining of borderlands as an intrinsic manifestation of imperial power. The amalgam of these four real and symbolic representations of power constituted an imperial cultural system.