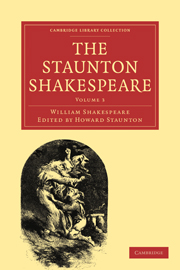 Fourteen years before the appearance of the folio of 1623, a quarto edition of this play was published under the title of “The Famous Historie of Troylus and Cresseid. Excellently expressing the beginning of their loves, with the conceited wooing of Pandarus Prince of Licia. Written by William Shakespeare. London Imprinted by G. Eld for R. Bonian and H. Walley, and are to be sold at the spred Eagle in Paules Church-yeard, over against the great North doore. 1609.” In the same year, another edition, or rather a second issue of the above, was printed with a different title-page,—“The Historie of Troylus and Cresseida. As it was acted by the Kings Maiesties servants at the Globe. Written by William Shakespeare. London,” &c. Nor is this the only diversity between the two issues, for the first contains the following curious prefatory address, which was omitted in all the subsequent copies,—

“A never Writer to an ever Reader. Newes.

“Eternall reader, you have heere a new play, never stal'd with the Stage, never clapper-clawd with the palmes of the vulger, and yet passing full of the palme comicall; for it is a birth of your braine, that never undertooke any thing commicall vainely: and were but the vaine names of Commedies changde for the titles of commodities, or of Playes for Pleas, you should see all those grand censors, that now stile them such vanities, flock to them for the maine grace of their gravities; especially this author's Commedies, that are so fram'd to the life, that they serve for the most common Commentaries of all the actions of our lives, shewing such a dexteritie and power of witte, that the most displeased with Playes are pleasd with his Commedies. […]