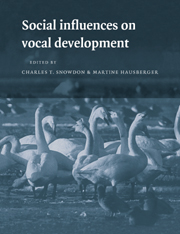 7 - What birds with complex social relationships can tell us about vocal learning: Vocal sharing in avian groups

Vocal learning in birds has evolved independently in several different avian orders, but is common in only two groups, oscine songbirds and parrots. The diversity and complexity of vocal repertoire structure among the species in these two groups is enormous. However, much scientific attention in avian song learning has focused on a small group of songbirds, north temperate migrant species, in which song is restricted mainly to males and the occurrence of song and territoriality is seasonal. In addition to these birds there is also a vast number of laboratory studies on the development and neural control of male song in the zebra finch (Taenopygia guttata), an Australian species with an unusually compressed developmental period. This large body of research has resulted in general models of song and vocal learning drawn from only a small subset of the world's birds.

While these many studies have broadened our understanding of learned vocal communication, it is our contention that there is much to be gained by study of the vocal behavior of avian species with more complex social relationships. Such species exhibit long-term associations between well-acquainted individuals, and, for many, longterm associations are related to permanent residence in an area. Another important characteristic is the tendency to live in stable groups for at least part of the year. These groups could be, for example, a winter foraging flock of chickadees, a breeding colony of caciques, a foraging flock of cockatoos, or a permanently territorial pair of tropical wrens.

By consideration of common features of disparate groups that represent more fully the portion of the world's birds that learn vocally, we can approach a more truly universal model of vocal learning.