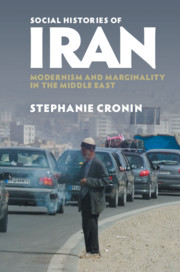 The history and historiography of Iran, as of the countries of the wider Middle East, have been dominated by the twin narratives of top-down, elite-driven and state-centred modernization, and methodological nationalism, the assumption that the geographical territory defined by the state and the population within its borders is the primary, and sometimes only, organizing principle for research and analysis. The chapters contained in this book seek to problematize both these narratives. Their attention is firmly on subaltern social groups, including the “dangerous classes,” and their constructed contrast with the new and avowedly modern bourgeois elite created by the infant Pahlavi state; the hungry poor pitted against the deregulation and globalization of the late nineteenth century Iranian economy; rural criminals of every variety, bandits, smugglers and pirates, and the profoundly ambiguous attitudes towards them of the communities from which they came; slaves and the puzzle of their agency. The historical experience of these groups is also deployed in a much larger attempt to understand the wider societies of which they were a part and the nature of the political, economic and cultural authority to which they were subject. In particular they are counterpointed to the praxis of modernism, hegemonic across the world from the late nineteenth to the late twentieth century and depicted here in all its astonishing ambition, reaching from the state itself into the deepest and most intimate layers of everyday life. In addition, and complementary, to this spotlight on subaltern lives, the chapters contained here seek to move beyond a narrow national context, seeking to demonstrate, through a series of case-studies, the explanatory power of global, transnational and comparative approaches to the study of the social history of the Middle East.