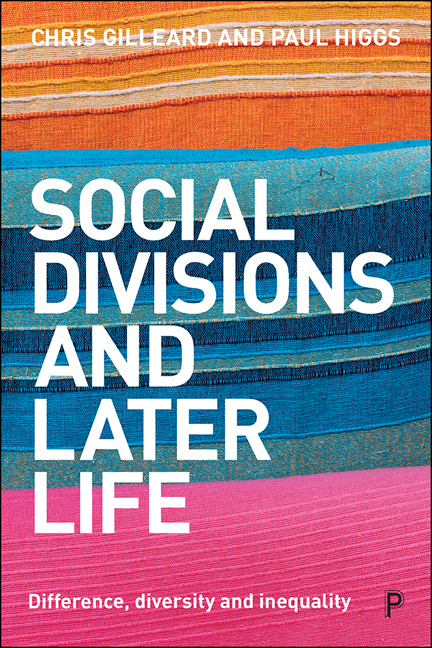 Growing social divisions within society have become a matter of renewed concern as the forces of the financialisation, globalisation and marketisation of the economy have come to form the prevailing explanatory narrative underlying change in the contemporary world (Krippner, 2005; Stockhammer, 2012, 2015; Anttonen and Meagher, 2013). While terms such as divisions, inequalities, exclusions and oppression provide much of the social text for these narratives, there is often a lack of precision in the way they are used. In writing a book about the divisions of later life, it is necessary to begin by examining these terms and their employment within the social sciences. ‘Social divisions’ has been used in a number of ways to describe or represent the structuring of society and its social relations (Carling, 1991; Morris 1995; Anthias, 1998; Payne, 2007). Most uses tend to emphasise the presence and operation of objective structural differences between social groups and their consequences for the stratification of opportunity and advantage. Under this ambit are the ways in which social structures impact on the lives that people live, the opportunities and obstacles they face, as well as the ways they find to make sense of themselves and their place in the world. These latter issues constitute the subjective realisations of social division that exist both in the context of and in contrast to the objective institutional structures that realise such divisions. The former concerns issues of location or position, the latter identity and belonging.

The term ‘social differences’, on the other hand, is less focused upon hierarchies of inequality and disadvantage. Like divisions, it is concerned with the categorisation of persons. But unlike social divisions, it incorporates processes of creating and maintaining distinctions and structuring the separation between common selves and distant others. Identity and subjectivity play more of a critical role in sourcing social difference, while social divisions imply an externally ordered hierarchy of resources, power and status. This book aims to draw attention to both difference and division in addressing the diversity with which later lives are experienced, lived and socially realised. Consciousness of age or agedness constitutes a social difference, of course, but the consciousness of age does not necessarily map onto the structural divisions in power resources and status that exist between younger and older people.