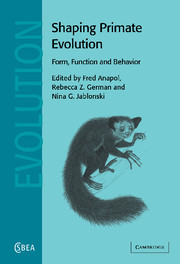 Once again, though my earlier work was clearly aimed at understanding functional adaptations in specific bone–joint–muscle units, it also equally clearly led into interests in primate diversity and evolution. I was not, of course, a primate taxonomist, never having had the requisite training. I never worked in field situations (being allergic to high temperatures, heavy rainfall, high altitudes, mosquitoes, leeches, etc). I therefore never participated in field observations of living species or in field discoveries of fossils. And though I was never formally educated in mathematics and statistics, and never capable myself of making advances in them, I was always a user who was interested in how such methods could be applied to data. Especially was I interested in the kinds of questions that the above methods and data might answer.

I have thus remained enormously interested in all such studies carried out by others – indeed, the data of others were essential to some of the investigations that I myself made. Mainly working with colleagues, however, I may have been perhaps the first to apply full multivariate statistical analyses to the data of field observation, of the niche. Likewise, through colleagues and students, I may have been amongst the first to use morphometric methods as tools to go beyond the data themselves, to seek correlations with behavior, with the niche, with development, and with evolution. The following chapters on the niche, on cladistics, and on the development of morphometrics itself carry all this so much further. These studies (and many others not represented in this book) go so very far beyond what I originally envisaged.