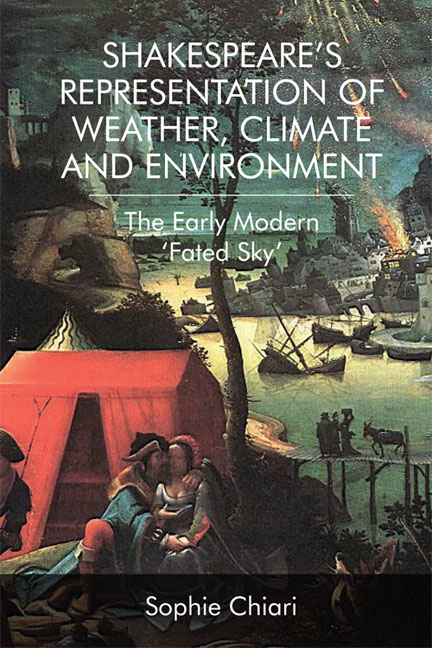 5 - ‘The pelting of [a] pitiless storm’: Thunder and Lightning in King Lear

How shall your houseless heads and unfed sides,

King Lear is yet another tragedy in which the title character yields to folly and, in his blind rage, estranges himself from those who truly love him. Lear thus soon appears as a throneless monarch overpowered by environmental forces in a universe that is neither green nor blue but very black indeed. During the Jacobean era, the working out of a new aesthetics of darkness influenced by northern mannerism probably encouraged Shakespeare to pass from a deconstruction of the traditional pastoral genre in As You Like It to the black pastoral of King Lear. The wintry landscape of the Forest of Arden has now become a barren heath where the wind blows and where the demented king wanders aimlessly in the Fool's company. The frozen silence of the desert woods is here replaced by the threat and terror of ‘hurricanoes’, ‘cataracts’ and roaring thunderclaps.

As an acousmatic play, King Lear is replete with rumbling noises and blasting winds as well as with ballads and snatches of songs in which the Fool's lines (‘He that has and a little tiny wit, / With heighho, the wind and the rain, / Must make content with his fortunes fit, / Though the rain it raineth every day’, 3.2.74–7) remind us of Feste's song at the end of Twelfth Night (5.1.385–404). But in the tragedy a fierce coldness, loud thunderclaps and frantically tempestuous weather replace the gentle wind and the falling rain that normally accompany as much as they disturb men and women's daily lives and seasonal routines.

Given Lear's old age, the foregrounding of coldness in the play sounds logical since, in the medical treatises of the time, elderliness was associated with a cold temperament, which provided an explanation, though not a treatment, for the mental confusion of the elderly. Early modern poets agreed with this view, clearly presented in the following poem by Thomas Whythorne, a musician of the 1570s who writes rather despondently in anticipation of his upcoming decay:

The force of youth is well nigh past,

Where heat and strength of late took place,

And now is coming in all haste

The cold, weak age for to deface

The show of youth