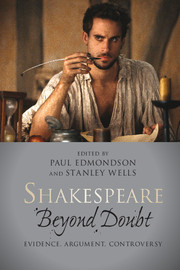 from Part III - A cultural phenomenon: Did Shakespeare write Shakespeare?

Ever since Alexandre Duval wrote his short comedy Shakespeare amoureux in 1804, the popular imagination has been fed with fictions showing Shakespeare composing his works, inspired by his life. Such biofictions have been a fertile field for imaginative writers in all genres, including television and film. More recently, however, analogous fantasies have sprung up around the authorship controversy, denying or casting doubt on Shakespeare's authorship. Such fictions come in two kinds, which might be dubbed the emancipatory and the anti-Shakespearian ones.

The emancipatory fictions claim the authorship of Shakespeare's works for a character representing a special interest group. Typically, they give an underprivileged group a boost by crediting one of them with the authorship of Shakespeare's works. Some causes, obviously, such as various religious denominations, do not need to challenge Shakespeare's authorship to begin with, as they can simply claim him as one of their own: Shakespeare has been represented as Protestant, Catholic, agnostic and even Jewish. The cause of gay emancipation, too, was strengthened by fictions of a gay or bisexual Shakespeare extrapolated from the Sonnets. But in view of the historical record, it is difficult to claim that Shakespeare was, say, a woman or black; and this is where the notion of a conspiracy to hide the real authorship of the plays offers a way out. In Arliss Ryan's novel The Secret Confessions of Anne Shakespeare, for instance, Anne writes some of her husband's work, but modestly remains in the background. Farrukh Dhondy's novel Black Swan combines an emancipatory approach with a Marlovian conspiracy theory. Shakespeare's works are co-authored by Christopher Marlowe and a fugitive black slave from the Caribbean, who is also Marlowe's gay lover. Like Oscar Wilde's ‘The Portrait of Mr. W. H.’, Dhondy's novel is cast in the form of a modern-frame story, showing how modern characters develop tentative theories around issues such as the identity of the addressees of the Sonnets or the authorship question. In true postmodern fashion, Dhondy first propounds the alternative authorship theory, then suggests it may be a form of self-projection by its originator, a former Caribbean politician with dubious credentials. This format allows for deliberate vagueness, so that awkward questions about the workings of the conspiracy can be avoided.