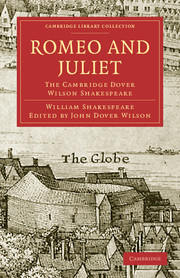 In November 1562, Richard Tottel, who a few years earlier had issued that famous ‘miscellany’ of Songes and Sonnettes which now passes under his name, published an octavo volume entitled The Tragicall Historye of Romeus and luliet, written first in Italian by Bandell, and nowe in English by Ar. Br. This History was a poem of a little over three thousand lines, in ‘poulter's measure’ (a six-foot iambic line followed by, and rhyming with, a second line of seven feet); a tiresome metre in large quantities, and hardly capable of intense passion, though here handled with some charm and tenderness. That ‘Ar. Br.’ stands for Arthur Brooke, a young poet who was shortly after drowned while crossing the Channel, we learn from George Turbervile, who printed an epitaph on him in 1570 which makes special reference to the promise shown in a poem on ‘luliet and her mate’. Most critics agree that this was the poem upon which some thirty years later Shakespeare founded his tragedy, but few, not we think even P. A. Daniel, Brooke's best editor, have appreciated the fullness of Shakespeare's debt. The drama follows the poem not only in incident, but often in word and phrase. Many of these verbal parallels are cited in the Notes below, but no verbal balance-sheet can convey a complete sense of the intimacy of the connexion. It looks as if Shakespeare knew the poem almost by heart, so frequently does he recall some expression or train of thought that occurs in one part of Brooke's story and adapt it to another.