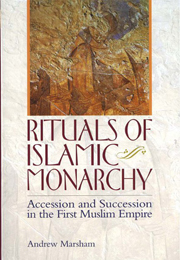 6 - THE MARWANID PATRIMONY AND DYNASTIC SUCCESSION

The Marwanids followed Mucāwiya and his sons in securing recognition of the caliph's successor by taking the pledge of allegiance to that successor, while the incumbent himself was still living. In Marwanid times, two successors were usually so recognised, in a stipulated order. The Muslims, or their representatives, swore allegiance (bāyaca) to the nominated successors, and this effected the change in their status; they became the walī al-cahds (‘two successors to, or possessors of, the covenant’). Thus, the wilāyat al-cahd (‘succession to, or possession of, the covenant’) was an adaptation of existing Arabian (and now Islamic) custom in which leadership was recognised by a pledge of allegiance.

As one would expect, there are clear parallels with Sasanian and Roman succession practices and also with South Arabian, and perhaps Aksumite Ethiopian ones; Near Eastern monarchy was replicated through dynastic succession, approved by God and ratified by acclamation. There are also more specific parallels that suggest the influence of Rome and perhaps Ḥimyar: as in the Christian Roman Empire, the ritual of succession is reminiscent of the representation of kingship in the Hebrew Bible, in which the king was chosen by God but also acclaimed by His people, and Umayyad rhetoric invoked the same biblical precedents to justify this. The importance of Romano-Syrian provincials as advisers to the Sufyanid and Marwanid caliphs, and Umayyad reliance on the former Roman Syrian–Arab allies, as well as upon emigrant troops drawn from the federation of Ḥimyar, suggest the channels of cultural transmission that may have influenced their administration.